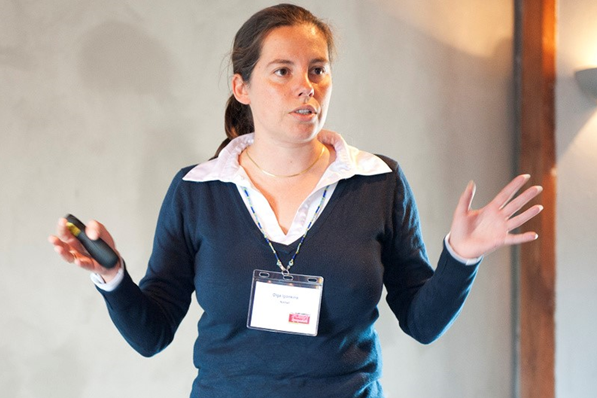 Nikhef particle physicist and prominent member of the ATLAS experiment at CERN prof. Olga Igonkina passed away on Sunday May 19th in Amsterdam, The Netherlands. Olga Igonkina had been ill for some time, but was working tirelessly until the end.

Olga ‘Olya’ Borisovna Igonkina was born in 1973 in Moscow. Her father was an engineer, her mother a biological scientist. At age 14 she went to a special school for kids talented in mathematics. She joined the ITEP institute as a research scientist in 1996 and worked at the Argus experiment and later at the Hera-B experiment at DESY in Hamburg.

She wrote her dissertation about J/psi production in Hera-B in 2002, with Michael Danilov as her inspiring supervisor. In 2002 she moved to SLAC to join the university of Oregon in the group of Jim Brau for a postdoc in BaBar, where she worked on searches for lepton-flavour violating tau decays.

In 2006, after three years in BaBar, she moved to CERN to become the leading physicist of the Oregon group in ATLAS at CERN. Her work in ATLAS concentrated on the ATLAS trigger, and later on physics with tau leptons. She started her appointment at Nikhef in 2008. She became a professor at Radboud University in Nijmegen in 2015.

Olga has supervised an impressive number of PhD students, in part because she was very successful in obtaining research grants. Among others, she got a VIDI and a VICI grant. For her efforts on the ATLAS trigger she was awarded an ATLAS outstanding achievement award in 2018. She also was very active in outreach activities with masterclasses and at Open Days at Nikhef, and in community building at ATLAS. Recently she organised ‘The 15th International Workshop on Tau Lepton Physics’ conference in Amsterdam.

Olga was a great scientist with a memorably strong work ethos. Until the very last moment she gave little room for her illness to affect her work. Olga leaves two kids (Lev and Artjom) and a husband, Nikhef-scientist dr. Wouter Hulsbergen. She will be missed dearly, inside and outside Nikhef. https://www.nikhef.nl/news/atlas-nikhef-physicist-prof-dr-olga-borisovna-igonkina-passes-away-at-45/