We participate in collider-based particle physics experiments with a focus on the “big” questions of particle physics. At present our main involvement is with the ATLAS experiment at the Large Hadron Collider (LHC) at CERN, near Geneva, Switzerland. In the LHC, proton beams are accelerated to energies of 6.5 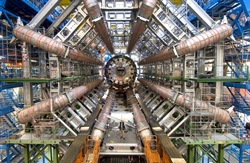 Tera-electronvolts (TeV), and two beams moving into opposite directions are then brought into collision in the center of the ATLAS detector, about 40 million times per second. The dector consists of several layers of sub-detectors, each of which is optimised for the detection and measurement of one or several kinds of long-lived particles produced in the collisons (for particle physics purposes, "long-lived" typically implies lifetimes larger than about 10 picoseconds!). One can then attempt to reconstruct the decays of heavier, short-lived particles starting from these long-lived particles.

The protons can interact in many different ways, effectively making the experiment a multi-purpose particle physics facility: the high luminosity (loosely, the large number of collisions) makes it possible to carry out precise tests of the Standard Model of particle physics, or to search for very rare processes. The ATLAS collaboration is large, of order 3000 physicists; this is what helps us tackle the wide range of interesting topics that can be studied. Its most important achievement during its first data taking period (Run 1, from the end of 2009 until the end of 2012, and with proton beam energies "only" reaching up to 4 TeV) was the discovery of the Higgs boson, the particle completing the Standard Model.

We have had significant contributions to two out of three of its decay modes that led to the Higgs discovery publication (the decays to a pair of W or Z bosons), as well as to the further studies of its properties (notably of its spin, mass and intrinsic parity). 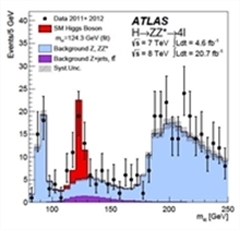 Beyond the Standard Model and Dark Matter particles

Despite the tremendous achievement of the Higgs discovery, physicists know that the Standard Model is unlikely to be the final theory of the subatomic world. Major open questions remain unsolved 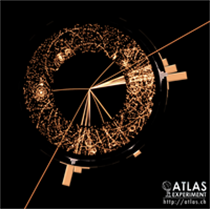 (read more).The SM can also not explain the existence of Dark Matter (DM) in the Universe, for which there is compelling evidence. The most attractive extension of the Standard Model that could address these questions is supersymmetry, linking each known fermion (boson) to a supersymmetric boson (fermion). A new Weakly Interacting Massive Particle (WIMP) at a mass between 10 and 1000 GeV/c^2 is a quite generic candidate to describe Dark Matter. Such new particles are expected to be produced in collisions at the Large Hadron Collider. We have made important contributions to Dark-Matter searches in Run 1 and Run-2 and will continue to do so in Run-3. In addition we work on phenomenological studies to optimize LHC searches and to determine the properties of possible Dark Matter particles. Finally, we search for processes that violate lepton number conservation as a sign of new physics.

Doing these physics analyses is only possible due to a superbly working detector as well as sophisticated triggering, readout, and software reconstruction. We contribute in particular to the trigger, to the readout of the muon detector, to the reconstruction of muons, and to the identification and measurement of b-quark jets and tau leptons.

The present members of our group are:

Dr. Menging Wu: works on the muon detector readout, in particular for the next detector upgrade

Dr. Sascha Caron: works on the search for  and phenomenology of Dark Matter particles, and on the ATLAS "missing transverse momentum" trigger

Anamika Aggarwal: works on the precise measurement of Higgs boson production and decays (in final states with two W bosons)

Edwin Chow: works on the search for lepton-flavour violation in tau-lepton decays

Our research is done in collaboration with members of the NWO-I institute for subatomic physics, Nikhef, and of the University of Amsterdam.