The baseline Pierre Auger Observatory consists of a surface detector (SD) with 1600 water-Cherenkov detectors spread over 3000 square kilometers and a fluorescence detector (FD) with four stations, each containing 6 telescopes with a field of view of a solid angle of 30 by 30 degrees and together they overlook the atmosphere above the Observatory. 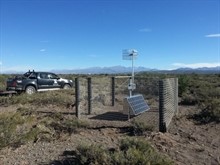 Within Auger, our group has pioneered the technique of detecting air showers through the radio signal they emit (Radio detection of air showers). This led to the creation of the Auger Engineering Radio Array (AERA), in which we collaborate with the Astrophysics department at Radboud. Our focus has been on understanding the radio signal emission process in detail in the 30-80 MHz frequency regime by comparing the radio data to the information provided by the Auger SD and FD. 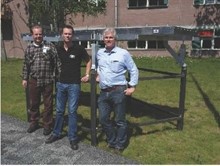 The baseline Pierre Auger Observatory is being upgraded to AugerPrime, in which the surface detector gets a massive overhaul. A Scintillating Surface Detector (SSD) layer and a radio antenna (RD) are added to each SD water-Cherenkov detector. In addition, the electronics has been improved. All enhancements are aimed to improve the quality of air shower measurements and therefore be better at distinguishing different types of cosmic rays hitting the Earth’s atmosphere. This opens up the path to identifying sources of cosmic rays, as well as understanding the interactions in the atmosphere and thus studying particle physics at the highest energies. Our group led the mechanical design of the scintillator detector and produced 180 complete modules. Together with the Astrophysics department we lead the design, production and commissioning of the complete radio detector layer.

In parallel we are performing R&D for the construction of Giant Radio Array for Neutrino Detection (GRAND), a proposed distributed radio detector with a total area of 200,000 square kilometer that will be a true multi-messenger observatory, being sensitive to cosmic rays, photons and neutrinos at the highest energies. Our group leads the development of GP300, a 300 square kilometer prototype of GRAND located in Western-China, in which all aspects of the full detector will be tested and optimized.

Our group works on many aspects on ultra high energy cosmic ray physics, with the main goal of using information on the first interactions in the atmosphere to test the standard model of particle physics in an otherwise unreachable energy regime. The present members of our group are: