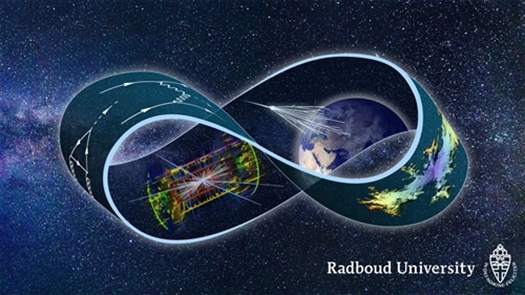 High Energy Physics (HEP) performs exciting, cutting-edge theoretical and experimental research in Quantum Fields, Particles and Gravity. Its scientific aim is to uncover the ultimate building blocks of matter, space and time and the fundamental laws governing their interaction at extremely high energies and short distances, beyond currently established theories.

Following the spectacular discovery of the Higgs boson, we search for signatures of physics beyond the Standard Model, e.g. from observing ultra-high-energy cosmic rays at the Pierre Auger Observatory and performing precision measurements at ATLAS@CERN. With new initiatives in PTOLEMY, DUNE and GRAND we will further investigate properties of the neutrino sector. Powerful quantum field-theoretical and machine-learning tools are being developed and implemented by HEP members to aid the search for new physics.

The Standard Model’s biggest shortcoming, the absence of gravity, has led to the creation and development by HEP of highly successful, quantitative models of spacetime dynamics in nonperturbative quantum gravity, providing remarkable blueprints for spacetime emergence and the ultraviolet finiteness of gravity. The observation of gravitational waves from mergers of black holes and neutron stars has opened a new observational window to our universe. HEP members have used current observations from the LIGO and Virgo detectors to test fundamental predictions of general relativity, and future more sensitive detectors will play an important role in the search for new physics beyond standard General Relativity.