We are excited about the smallest constituents of our world and about their interactions. Here are some of the big questions that are on our mind:

From the resulting observations we learn what the universe is like - or what it is not like.

As one of our specialties here at Radboud University, we search for new fundamental physics that could show up at very different energies. We search for new particles that can easily hide from observation, either because they are so heavy that no existing experiment could produce them, or so light and weakly interacting that they escape detection. Through quantum effects such undetected heavy new particles could change the interactions between the particles that we already know and master. By either using effective field theories as a framework to describe such effects or by making precise predictions based on dedicated new-physics models (such as dark-matter models or supersymmetry), we combine information from observations at the LHC, at flavour experiments, and in measurements of electric or magnetic dipole moments of elementary particles. This is a powerful approach, because it enables us to detect even tiny effects of new particles if they show up in different places at the same time. 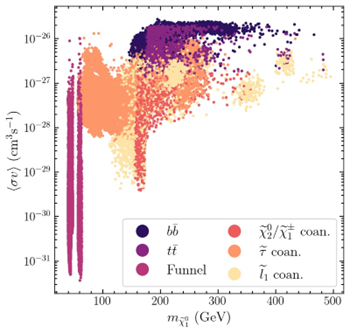 The mass of a supersymmetric dark-matter candidate: combined impact of collider and non-collider physics, early- and late-universe constraints and the measurement of the magnetic dipole moment of the muon.

Light new particles with very weak interactions could be excellent candidates for dark matter. In our group we investigate their cosmic history and predict how they could be observed at particle physics experiments. Some of these new particles have very long lifetimes and decay far away from their production point. For such long-lived particles we design new search strategies at current and future experiments. 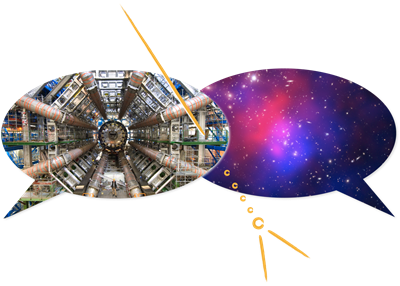 In order to find small new-physics fingerprints from quantum effects, the comparison between theory and experiment should be as accurate as possible. This places heavy demands on the precision of the known-physics predictions. It is then necessary to identify the most important sources of quantum corrections and improve on their treatment. In our group we focus on handling classes of corrections in a collective way (a method known as `resummation’) and on a proper separation of the energy scales that govern the quantum corrections.