The Jury for the Hanneke Janssen Memorial Prize has reached a decision to award Sanne Vergouwen this year's prize.

The awarding will take place on Friday 16 December at 5pm in Huize Heyendael.

The Jury received no less than nine nominations this year, all of which showed admirable skill and competence in the various topics they address in the history and philosophy of modern physics.

It was the unanimous decision of this Jury to award the 2022 Hanneke Janssen Memorial Prize to Sanne Vergouwen for her Master’s Thesis: “Emergent Solitons and the Philosophy of Non-Perturbative Quantum Field Theory” submitted to Utrecht University. We also want to mention the Master’s Thesis of Edoardo Tagliani: “Measurements and elements of Reality in Relational Quantum Mechanics” also submitted to Utrecht University, as a close runner-up.

On Vergouwen:
This work combines the philosophy of quantum field theory (QFT) with a discussion of the long-standing problem in the philosophy of science of when we can regard one theory as being ‘emergent’ from another more ‘fundamental theory. The Thesis breaks new ground in directing the debate on the interpretation of QFT away from the perturbative methods of effective quantum field theories and redirecting it towards a study of models in QFT which can be characterized with more mathematical rigor: the so-called soliton solutions.

Focusing on the examples of the sine-Gordon and Seiberg-Witten solitons, and their duality relations with other theories, it is argued that these exemplify ‘epistemic emergence’ (in the first case) and ‘ontological emergence’ (in the second). But in stark contrast to the usual expectation that emergence only obtains between a ‘less fundamental’ and a more ‘fundamental’ theory, this work shows that in these cases emergence obtains as a symmetrical relation between two theories, so that there are no grounds for regarding one as more fundamental than another.

The Jury was impressed with the way in which this Thesis combined the traditions of philosophy of science, philosophy of QFT and theoretical physics in a novel way, and was able to draw surprising conclusions.

On Tagliani:
The Jury admired the clarity of the writing and how this Thesis connected the work of Niels Bohr, Grete Hermann, and of Alexia Auffèves to Rovelli’s relational Quantum Mechanics. 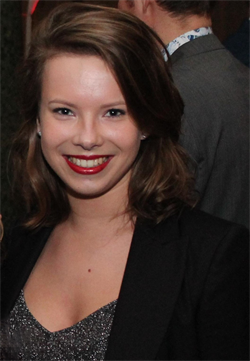