Neuromorphic (brain-inspired) hardware can perform scientific computations faster and more energy-efficiently than conventional computing systems. Potentially, it can even perform calculations that are not yet possible with current computer systems. This is evident from the first results of the project "Neuromorphic computational and data science: toward disruptively green computing" by IBM, SURF and multiple research institutes within Radboud University. 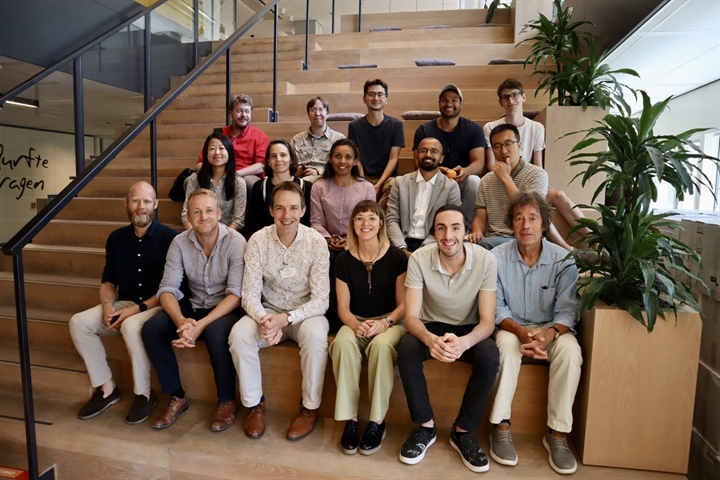 Attendees of the peer review workshop in July

The limits of conventional computer systems are becoming increasingly apparent. Current computer systems consume enormous amounts of energy, about seven per cent of global energy production, and is expected to increase exponential over the next decade.

Within computational science, the demand for new energy-efficient hardware is growing; hardware that should lead to a faster, more economical and scalable technology for scientific calculations. In the project' Neuromorphic computational and data Science: towards disruptively green computing', IBM, SURF and Radboud University investigate how neuromorphic hardware can meet this need.

The first results were presented at a peer review workshop in July. Rewatch the workshop Neuromorphic Scientific Computing or go to the preprint 'Benchmarking energy consumption and latency for neuromorphic computing in condensed matter and particle physics' at arXiv.org.

The team examined two use cases at Radboud University in which neural networks are deployed: an application from particle physics on anomaly detection and an application within magnetism research.

Johan Mentink, Radboud University researcher, explains: 'From theory, the expectation was that neural networks could run much more efficiently on neuromorphic hardware. However, this had never been measured before.'

'Science relies increasingly on digitalization and computing as tools for analysis and experimentation. The exponential increase in computing demand also leads to an unsustainable energy footprint. Thus, we need to experiment with energy-efficient methods, tools, and algorithms & hardware technologies. The experimental platform at SURF provides that environment & expertise for collaborative technology exploration.' says Sagar Dolas, SURF.

Heike Riel researcher at, IBM, adds, 'This is a great start of the project with Radboud University in which Dominique Kösters (University of Twente) first implemented the physics calculations on standard digital hardware at SURF. He then simulated with us at IBM Research in Zurich how much energy the same analysis costs on neuromorphic IBM hardware. It turned out to be not only much more economical but also much faster!’

'This research was simulated on IBM hardware. The energy consumption of all individual components of the chip was added up and showed the potential of this chip. In follow-up research, we want to demonstrate that the chip works like this. An important aspect of this is the influence of accuracy. Neuromorphic hardware uses lower precision. We want to further understand the influence of accuracy on energy consumption measurements. We also want to test this on large networks; we think the difference with conventional computer systems is even larger there,' says Johan Mentink.

'In the long term, we want to investigate for what computations this chip is really advantageous: Which computations with neural networks give the most advantage on neuromorphic hardware?' How will it integrate with traditional computing? How will scientific workflows use such hardware? What changes are required?'

Do you need more information or do you have any questions? Please contact Johan Mentink, Radboud University or Sagar Dolas, SURF.