Understanding how interactions occur between atoms and molecules at the single particle level reveals the fundamental physical principles that underly chemistry. What happens when a molecule and an atom come together and collide? Why and how do these particles exchange or lose energy? How can we model and predict the outcome of molecular collisions? Scattering experiments provide an essential tool in the quest to unravel the nature of these chemical interactions. At very low energies the quantum mechanical nature of molecular interactions reveals itself as the colliding particles start to behave like waves. Researchers of the Institute for Molecules and Materials (IMM) of Radboud University present a method to trace these waves in low-energy NO-He collisions. With this method, rotational energy was added to the nitric oxide (NO) molecules before the collision – essentially making them spin. The researchers investigated the process in which the collision with the He atom stopped this rotational motion. They were able to trace where the rotational energy went and how it influenced the wave patterns underlying the collision. “These results provide an elegant tool to study the essence of molecular interactions in a clean and controlled way”, researcher Tim de Jongh says.

The way atoms and molecules move and interact with each other depends on their energy and on their motion. To accurately map these interactions, experimentalists aim to study the collisions in a controlled environment. However, due to the small size and high speeds the colliding particles are hard to control. While in previous experiments it was already possible to get full control over the rotational and vibrational motion of the molecules, gaining full control over the relative motion between the colliding particles (speed of approach and ‘miss-distance’) has remained a long-standing dream in scattering experiments. A key method of gaining control over this motion consists of using molecules which have very low energies. While experimentally challenging to reach, this ensures that not much energy is available for the relative motion, limiting the movement possibilities. This makes it possible to minutely trace the particle motion during the collision. The goal of these experiments, however, is to map the dynamics of a collision. But with the relative motion being limited there is not much dynamics left to map!

The research team demonstrated an innovative method that resolves this catch-22: by using the rotational motion of the molecule to their benefit. To this end, they studied collisions between helium atoms and NO molecules at very low energies with near-full control over the relative motion between the particles. The NO molecules consist of two atoms (nitrogen and oxygen) and can be viewed as two billiard balls connected by a stick. Rotational motion of the molecule then is simply the rotation of this stick. It is exactly this motion that the researchers used to their benefit. First, they caused the NO molecule to rotate in a controlled way before the collision. Then, they detected only those molecules that stopped rotating after the collision.

How this leads to richer dynamics is illustrated in the figure. The top left shows collisions without the additional rotation of the NO molecule. The collisions occur in a controlled way, but do not show rich dynamics, as illustrated by the wave pattern – which represents the probability the NO molecule will fly in a certain direction after the collision – in the top right. The bottom left shows collisions in which the new technique is applied: a laser hits the NO molecule, causing it to rotate in a controlled way. It collides with the helium atom and proceeds to fly away at higher speeds as the energy initially stored in the rotational motion now becomes available. This leads to more dynamics, a richer wave pattern – shown in the bottom right – and thus a more sensitive probe for the interactions between the particles.

“We can now combine the best of both worlds”, researcher Tim de Jongh says. “The release of the added rotational energy leads to more interesting dynamics. And thanks to the low energies at which we study the collisions we can accurately trace where this energy goes during and after the collision. We are even able to map how it influences the quantum mechanical waves that underly the collision.” The results have been published in a recent Nature Chemistry publication entitled ‘Mapping partial wave dynamics in scattering resonances by rotational de-excitation collisions.’ 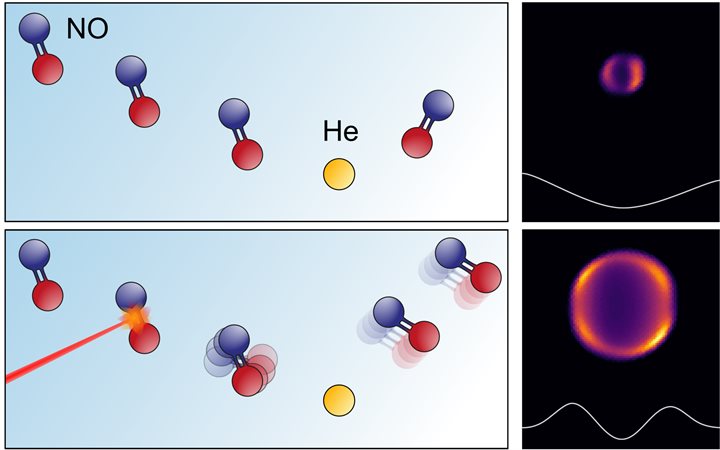 Figure 1: Illustration of the new technique applied to study the collisions between NO molecules and helium atoms.

At higher energies, the reverse process can happen: non-rotating molecules can be caused to rotate by the collision with the helium atom. “Imagine again that the molecule consists of two billiard balls connected by a stick. Let’s say it’s lying still on the table. If now a third billiard ball – the helium atom – hits the molecule at one of its end points, it will start rotating.” This is exactly the reverse process of what is described above. To verify their findings, the researchers also mapped the wave dynamics of this time-reversed process. “According to the laws of quantum mechanics, this time-reversed process is determined by the exact same waves as the non-reversed process, which is exactly what we observed.”

The aim of the research group is to understand the fundamental principles of how atoms and molecules interact with each other. “With this technique, we have solved a fundamental problem in collision experiments”, de Jongh says. “We have demonstrated that we can indeed use the rotational motion in order to enrich the dynamics of the collision, while maintaining a high degree of control.”

The research of the group has so far focused on explaining chemical processes. “The next step is to control these collisions. This can be achieved by studying molecular collisions in controllable electric fields. Learning how to control collisions can benefit all kinds of other disciplines”, de Jongh concludes.

These studies in low-energy NO-He collisions were a combined effort of experimental and theoretical researchers from the IMM. Measurements of the wave patterns underlying the collisions were performed by the Spectroscopy of Cold Molecules department. The Theoretical & Computational Chemistry department theoretically modelled the scattering processes. It was through this collaboration that the researchers were able to trace the quantum mechanical waves during the collision.

Tim de Jongh was PhD student at the Spectroscopy of Cold Molecules group within IMM. The group studies molecular collision processes at low energies and with unprecedented precision. They develop and use unique experimental techniques to control, collide and image individual molecules in the gas-phase to control properties such as the velocity, quantum state, and orientation of individual molecules in a molecular beam and enable the study of molecular processes in unexplored regimes and with unprecedented precision.