Molecular interactions are the driving force of chemistry. In collisions between molecules, the measurement of the deflection of a molecule’s trajectory provides one of the most sensitive probes of these interactions. Atom-molecule collisions have been studied in detail and oftentimes the trends can be understood using a few guiding principles and rules of thumb. If a lot of energy is to be transferred, a "hard" collision is needed in which the atom and the molecule collide head-on, causing them to bounce back. In this study, researchers from the Institute for Molecules and Materials (IMM) of Radboud University studied molecule-molecule collisions with high precision. Following a hard collision, the molecules should also have bounced back, but instead were mysteriously seen to continue in the forward direction. “It is as if the molecules pass straight through one another.” 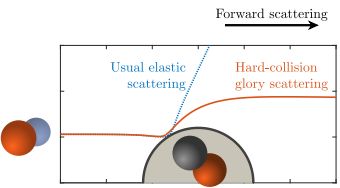 The research team studied collisions between molecules where a large part of the collision energy is absorbed by both molecules, as the molecules start rotating rapidly. Unexpectedly, they found forward scattering in deeply inelastic collisions between NO radicals and CO or HD molecules, despite that head-on collisions are needed to induce sufficient energy transfer. “What you would expect is that the energy is absorbed in a hard collision, and that this head-on collision would cause the molecules to bounce back in the direction they came from”, researcher Tijs Karman explains. “But what we observed goes against this rule of thumb; the molecules collide head-on, but somehow emerge from the collision flying forwards, instead of backwards, as if they had passed straight through one another.” The mechanism applies to collisions in which the molecules transfer a lot of their energy into rotation, so that after the energy transfer the molecules move much slower and stay together longer. Therefore, after energy transfer, there is a stronger effect of the attraction between the molecules. This attraction causes the path of the molecules to bend around each other, even if they initially collided head-on (see illustration). “The molecules still collide frontally, transfer energy, and only after that, they start their slow dance around one another”, Karman adds.

This effect has not been seen before because molecule-atom collisions were mainly studied in which typically not all the energy is transferred. In collisions between molecules, the second molecule can absorb the remaining energy. In this situation, the new collision mechanism occurs ubiquitously. The results have been published in a recent Nature Chemistry publication entitled ‘Glory scattering in deeply inelastic molecular collisions’.

The study was really IMM team effort and a combination of experiments and theoretical work. Guoqiang Tang and Zhi Gao performed the experiments within the Spectroscopy of Cold Molecules group, led by Professor Bas van der Meerakker. Matthieu Besemer, a joint PhD student between the SCM group and Theoretical Chemistry, developed theoretical models and performed numerical calculations together with Tijs Karman. “Only because of the close ties between experiment and theory in the IMM did we discover the observed forward scattering was unusual, and exposed the intricate mechanism responsible.”

Tijs Karman is Assistant Professor in the Theoretical and Computational Chemistry group within the Institute for Molecules and Materials (IMM) at Radboud University. This group aims to explain and predict properties of molecules, clusters, and molecular solids. Part of the research is to study quantum phenomena in molecular collisions. Karman focuses on theoretical research into collisions between ultracold molecules, which are promising for quantum computing and simulation. “Ultimately realizing these applications requires understanding and controlling collisions and interactions between molecules,” Karman concludes