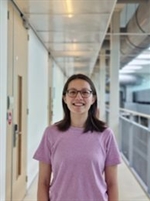 Karina Nakashima, researcher in Molecular Materials in the group of Evan Spruijt at the Institute for Molecules and Materials (IMM) has been awarded the KNCV Van Arkel Prize. KNCV, the Royal Netherlands Chemical Society, section Soft Matter grants the Van Arkel Prize every two years to a young chemist who has performed high quality scientific research in the field of inorganic and physical chemistry. “I was surprised by the outcome, but aware of the nomination. Some months ago my colleague Iris told me about the award and I gathered the courage to ask Evan to nominate me, only to find out he was already planning to. That is what was most important to me, because as a PhD you also want confirmation that you did well, beyond the defence and publications.”

From 2017 to 2021 Nakashima worked towards her thesis entitled ‘Chemistry of active coacervate droplets: Liquid droplets as a minimal model of life’. Her project involved the use of chemical reactions to control coacervate droplets – assemblies of (charged) biomolecules in an aqueous liquid phase –, but also the knowledge of physical chemistry of phase separation, with the ambitious goal of realising synthetic life at the molecular level. Nakashima demonstrated that coacervate droplets act as  functional prebiotic prototypes of a cell. She studied the influence of chemical reactions over the growth of coacervate droplets. By serendipity, she also found clear evidence for the lack of Ostwald ripening in certain coacervate compositions, something that was speculated before in the field but not yet looked into. Liquid droplets normally grow and merge into a macroscopic liquid phase, but in coacervates based on oppositely-charged components this process is suppressed.

“I hope to have shown that the idea of chemical reaction inducing life-like behavior in a droplet is quite general. I think since the discovery of liquid organelles people were very interested in looking at how a reaction determines whether droplets form or disassemble, but my PhD project was one of the first to focus on the behavior – growth. And there is other behavior to try too, like motion and division. Evan had laid the bases about coacervate structure and stability in his own PhD thesis 10 years ago, and perhaps a natural step was to then look into what happens when the droplets are active.”

Nakashima work has impact in the community. Karina had publications in Nature Communications and Nature Chemistry, other papers of her which have been cited over 70 times. Currently, Karina is working as a Postdoc researcher at University of Groningen at the group of Nathalie Katsonis. The KNCV Van Arkel Prize was awarded at the Chains Conference in Veldhoven by KNCV Chair Floris Rutjes. The prize consists of a certificate and a money prize € 2500 which can be spend freely. And she has opportunity to present her work at CHAINS, along with Evan Spruijt.