Industrial processes need to be carefully controlled, which often starts with monitoring a key performance indicator (KPI) of the process, such as product quality or purity. Measuring such KPIs at high frequency can however be costly. In such cases, it is common to use a multivariate regression model, that predicts the KPI from physical process variables that are measured already anyway, such as temperatures, pressures, flow rates, etc. Such a model is called a soft-sensor and can be a key enabler in providing accurate and timely control to a production process, but only if it is well-calibrated.

Key to calibrating an accurate soft-sensor is to select only those process variables as predictors for the regression model that are actually predictive of the KPI. Quite some methods to perform such variable selection are explored in the literature, but their exploration generally lack in two regards. 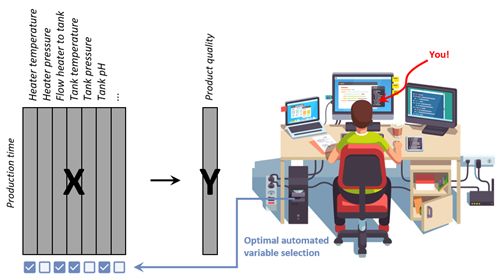 This internship will help to increase your: