The immune system is characterized by hundreds of phenotypically distinct cell populations that accomplish different roles in the organization and effectiveness of the immune response.

The immunological properties of the cells are defined by the different expression of proteins on the surface, known as surface markers. An insightful characterization of these properties can be possible with the laser-based technique Polychromatic Flow Cytometry (PFC) that allows the simultaneous detection of several markers on the surface of single cells.

However, current conventional analysis used in PFC are not able to extract the whole relevant information from the data because they look only at pairwise relation between the markers. In this context the PFC is in need of multivariate data analysis that are able to investigate the relation between all the markers and so provide a comprehensive view of immune system.

In this context we have already developed a multivariate method called Elimination of the Cells Laying In Patter Similar in Endogeneity (ECLIPSE) that focuses on the deviation of surface marker expression from normal condition. This method is based on Principal Component Analysis and provides an objective, data-driven multivariate filter for systematic elimination (fig.1) of the no-activated cells within the patient individuals based on the surface marker expression. Through this elimination it is possible to build a dedicated model (fig.2) based on the variability of the cells that turn into an activated state during the response. These cells are known as adaptive immune system cells. 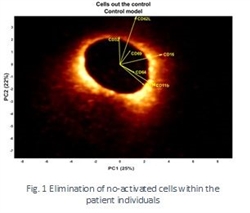 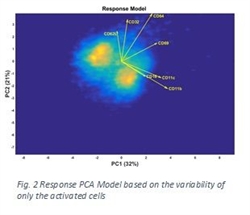 In order to have a complete overview of the immune system mechanism it is necessary to take into account that the immune system can respond just with an increase of the proliferation of white blood cells naturally present in the body, known as innate immune system cells. Since ECLIPSE focuses on the surface marker expression exclusively, it does not take an increase of the expression of the innate cells. The internship proposal aim to adapt ECLIPSE to provide a positive filter for the over- expressed normal white cells and understand the mechanism behind the innate immune system.