NSM Focus | In search of the balance between man and technology

After 28 years, Pierre van Amelsvoort (61) is retiring as a lecturer of the evening course in Business Administration of the Radboud Management Academy (RMa). Since 1991, he has introduced hundreds of evening students to the socio-technical approach to business administration. That approach may be more than seventy years old, but it is more current than ever. "We have reached the same point as the English coal mines halfway through the last century."

"I have guided fifty groups, each of around 25 students. Not that I have kept an exact tally of those groups, but they have grown in number. Otherwise I wouldn’t have known. Now my thoughts are: fifty groups, that is a good number." And so, Pierre van Amelsfoort bids us farewell. Born in Boxtel, he decided in 1976 to study technical business administration in Eindhoven. There he got to know Professor Ulbo de Sitter, the founder of the sociotechnical system in the Netherlands. "His approach appealed to me enormously. I graduated under his guidance and have dealt with sociotechnical systems ever since: first as an assistant at the Eindhoven University of Technology and later as a management consultant and lecturer." 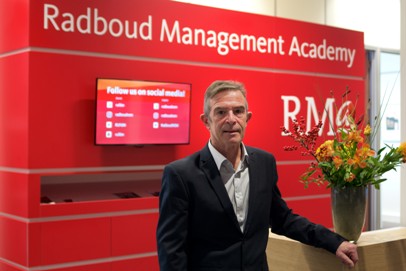 Sociotechnics is a business movement that wants to optimise productivity, quality of work, and quality of employment relations, all at the same time. "That integrated approach is unique," says Van Amelsfoort. "Other theories usually focus on only one of those aspects."

The term “sociotechnics” was first used in a study about the English coal mines, halfway through the last century. Mining companies found that previously implemented mechanisations had an adverse effect on the productivity and involvement of the miners. They called in sick more frequently and there were more strikes. In a study into the causes, the miners were also given a role to play. "That was revolutionary: never before had workers been involved in the research and design of an organisation."

On the wrong foot

In the year 2019, Nijmegen and Maastricht are the only Dutch universities that explicitly pay attention to sociotechnical systems. This relative obscurity has a number of reasons, according to Van Amelsfoort. "The term 'sociotechnics' has wrong-footed people. Techies think of it as tame stuff, while people in areas such as the care sector worry about a technocratic approach. In addition, sociotechnics is quite tricky to comprehend and implement. You can’t make that happen just like that."

Van Amelsfoort should know. Since 1990, his management consultancy firm ST-Groep has assisted numerous companies in implementing sociotechnical elements. "Usually we develop a vision of the future with the management team first. We then share this with all employees, during a round table conference, for example. Next we redesign the organisation, in which the work processes, rather than the functional units, take centre stage. Key elements in this are the customer value process, cooperation, decentralisation, and participation."

In addition to his professorship at the RMa, Van Amelsfoort spent fourteen years as professor by special appointment at the Nijmegen School of Management, from 1993 to 2007. "As a professor, I lectured young people, usually with little work experience. Often, they found it difficult to comprehend how a company functions and what role areas such as politics play. To top it all off, there were 300 others attending lecture with them. In such a big room, you primarily have to talk at people. At the RMa, there was much more room for dialogue. The evening students came in small groups of about 25 people. They didn’t come to earn credits or a degree; they came to develop themselves. Within five minutes, there were all kinds of questions and discussions."

When asked whether he has managed to put his stamp on business administration studies in the past few decades, he remains silent for a moment. And then: “That’s a tough one! The RMa deliberately opts for the social aspects of business administration and gives sociotechnics a key role. Many students specifically come to Nijmegen because of that. I think it has often been possible to strengthen their enthusiasm. Whether that was my doing is not important to me. After my departure, sociotechnics will still remain an essential part of the evening courses."

70 years after its creation, Van Amelsfoort feels that sociotechnical systems are still valuable. "We are in the middle of a digital revolution. Some computers are already better at making diagnoses than doctors. According to some, most accountants have disappeared in the last ten years because computers have taken over their duties. It is specifically because technology is becoming more dominant that we have to think about how we organise work: what tasks should we turn over to machines, what tasks are beneficial for humans to carry out, and how do we coordinate this interplay?"

According to Van Amelsfoort, this is how we have found ourselves in the same position as the English mining companies in the last century. "Like them, we have new technologies. Again we must ask ourselves: what are the desirable and undesirable consequences of that and how can we counteract the latter? The discussion on the balance between man and technology must begin: not only at the organisational level, but also at the level of society as a whole. Sociotechnics can play an important role in that. In this respect, that theory is more current now than ever."