NSM Focus | Romain Malejacq: ‘We have a moral responsibility to welcome Afghans who want to leave their country’

Romain Malejacq has been studying Afghanistan since 2007. He is a researcher at the Center for International Conflict Analysis and Management (CICAM) and wrote the book Warlord Survival: The Delusion of State Building in Afghanistan. What are his views on the current developments in Afghanistan? How does he see the future for the war-torn country? And what is our responsibility in the West?

Afghanistan has been the main focus of your research for almost fifteen years. What makes this country so fascinating? 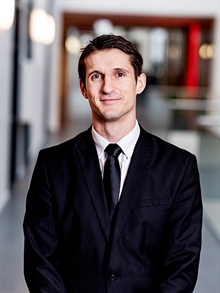 ink, culturally, very few places further away from what we are used to in Western Europe. The politics are very intricate, the decision-making follows different rules. Then there is the history, the people, the complexity. Time and time again, we think we understand Afghanistan and then we realise we don't understand anything. The more I go to Afghanistan and the more I study the place, the more I understand: I know nothing. That is a bit depressing, but also encouraging to go even further in my research.”

Were you surprised by the recent developments in Afghanistan?

“I had seen the outcome coming, but not the rapidity of it. After the peace agreements in Doha in February, 2020, many people, including myself, already said: if the US withdraw in a rush without empowering the government, it will be a catastrophe.

The quickness with which the Taliban took the countryside was predictable, because there is almost no state presence there. But I was surprised by the rapidity with which they took the big cities. I assumed the Afghan national army and the Afghan security forces would at least be able to control the five main cities. But the Taliban strategy was on point, both militarily and politically. And the morale of the national army was very low because they felt abandoned by the US. They had hardly any confidence in the Ashraf Ghani regime. Almost no one was willing to die for it.”

The Taliban are now in power and some people say it is a different Taliban than in the 1990s.

“I can tell you there is no such thing as a Taliban 2.0. They have not changed ideologically and have exactly the same leadership as in the 1990s. Also, their view on political regimes and the way they perceive the role of women in society have not changed.”

What are the main challenges for the Taliban?

“First of all a humongous economic crisis. The Afghan economy is mostly based on two things: opium and economic aid. The Taliban have taken control of the poppy production, but that is not going to be sufficient. The World Bank, the US and the EU have all stopped aid and frozen assets, which leads to the second challenge: being recognised by the international community, or at least getting economic aid.”

In the 1990s they failed to get international recognition.

“Yes, but while they have not changed ideologically, they have changed politically. They have learned political pragmatism, have much more elaborate diplomatic relations and present themselves very differently. My guess is they will try to adapt their image and exert some restraint, so that their regime is acceptable to the international community. Mind you, no one is going to be fooled. They are not going to pretend it is a democracy. And we are not going to believe it is a democracy. But they will probably refrain from the most barbaric acts of violence, like public executions, in order to get international recognition. They may also decide to keep some of the current bureaucrats in because they – unlike the Taliban – actually know how to run a state.”

Is there anything you can do here for the people over there?

“That is something I have been racking my brain about. I have been feeling very powerless. I try to engage in advocacy and have put my name on several letters to governments to defend the cases of e.g. interpreters who have worked for western governments and are now seeking asylum. Also, I was invited to give talks on current events here and there, including here at the university. For instance, Radboud Reflects invited my colleague Lema Salah and me to talk about the situation, and I joined an event at LUX that she had organized to help raise awareness of the situation in Afghanistan and stress our moral responsibility. Furthermore I have been doing a lot of media appearances. But to be honest, I really do feel powerless.”

Do you see yourself going back anytime soon?

“Yes, definitely. But the question is: what can I do there? I am not interested in just going there and seeing how miserable it is for people under the Taliban. That does not feel right. What can be done, is research on the Taliban. But it is difficult because if I talk to people I might directly endanger them. So I am reluctant but I do want to go back to the research and to the people there. It is important to continue going because we do not want the Afghan people to feel forgotten.”

You mentioned our moral responsibility. Can you elaborate on that?

“I may feel powerless, but one message I can repeat is that Afghans, even if they did not work directly for Western governments, have been encouraged by the West to believe in a new liberal order and to be part of a new society. Now that the Taliban are in power, they are being targeted for that. We have a moral responsibility to welcome Afghans who want to leave their country and seek asylum here.”

You have just been awarded a Vidi Grant of the Netherlands Organisation for Scientific Research (NWO). For what kind of project is that grant?

“The project will be about commander politics. In civil wars, with multiple armed groups, local commanders switch from rebel to government side and vice versa, and constantly form and break alliances. I want to focus on Afghanistan and Somalia to understand the logic of the organisation and the conflict dynamics. My expectation is that this local level is key to understanding what is going on in a conflict.”