He has been researching populism for more than twenty years. By doing so, he wants to introduce nuances and create understanding. ‘That is what I want as well: to understand the world. That’s why I became a political scientist.’

Andrej Zaslove’s field is comparative political science with a special focus on populism. “I obtained my doctorate in 2004 with research on the Lega Nord, an Italian populist party. At that time, populism was a marginal phenomenon. Researchers who studied it were seen as odd ducks. Nowadays, populism is everywhere and people are immediately interested when they hear what I do.”

But what is populism exactly? The important thi 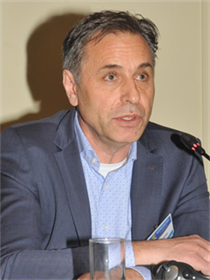 ng is that it occurs on both the left and right sides of the political spectrum. According to Zaslove, three concepts are crucial. “First, that society is divided into two homogeneous groups: a pure people against a corrupt elite. Second, that there is a clear field of tension between the two. And third, that the people have an unambiguous will. Thus, there is no room for pluralism.”

Defined in this way, society has less populism than people often think. “Many politicians adopt elements of populism without being truly populist. Mark Rutte, for example, regularly uses populist language, but he is not a populist, because with him there is no tension between the people and the elite.”

Together with fellow researchers, Zaslove has designed a scale to measure the populist content of political parties throughout Europe. In the Netherlands, the Party for Freedom (PVV) turns out to be the most populist, closely followed by the Forum for Democracy. “On a scale from 0 to 10, they score a 10 and a 9, respectively.” Quite a bit behind are the Socialist Party (SP; 6.5), followed by parties like 50Plus, the Party for the Animals (PvdD) and Denk (which represents the rights of the Turkish population in the Netherlands). The People's Party for Freedom and Democracy (VVD), the Christian Democratic Appeal (CDA) and the Labour Party (PvdA) come next, and at the very bottom we see the Green Left (Groenlinks) and Democrats 66 (D66). “Thus, according to our scale, the latter parties are hardly populist at all.”

Through his research, Zaslove wants to create understanding and nuance. “Populism is simply a part of society, and not everything that populist parties do is by definition bad. Many people consider populism to be a danger to democracy. But our research shows that people who score high on the populism scale are more in favour of democracy than people who score lower.”

That result also needs some nuance, because the researchers do not yet know exactly how the respondents perceive ‘democracy’. “There may be tension between the populist idea of democracy and our liberal democracy. We would like to investigate this in more detail in the future.”

You can find the populism scale online. There you can view data from all European countries and analyse it by country or theme.