The current global efforts are insufficient to stop the unprecedented decline of nature: transformative societal changes are necessary to stop the loss of biodiversity and restore nature. This is the conclusion the Global Assessment of the Intergovernmental Science-Policy Platform on Biodiversity and Ecosystem Services (IPBES) that was published today. The Global Assessment was prepared by 150 leading international experts from 50 countries. Among them Ingrid Visseren-Hamakers, professor of Environmental governance and politics at Radboud University.

The assessment analyzes the causes for the loss of biodiversity, the implications for people worldwide, and options for bending the curve of the loss of biodiversity. The conclusions don't lie: nature is declining globally at rates unprecedented in human history and the rate at which species are lost is accelerating. This will likely have grave impacts on people around the world. Around 1 million animal and plant species are now threatened with extinction.

Ingrid Visseren-Hamakers has been appointed Professor of Environmental governance and politics at Radboud University starting May, 15 2019. She is Coordinating Lead Author (CLA) of the chapter with policy options for policy makers and one of the authors of the summary for policy makers. 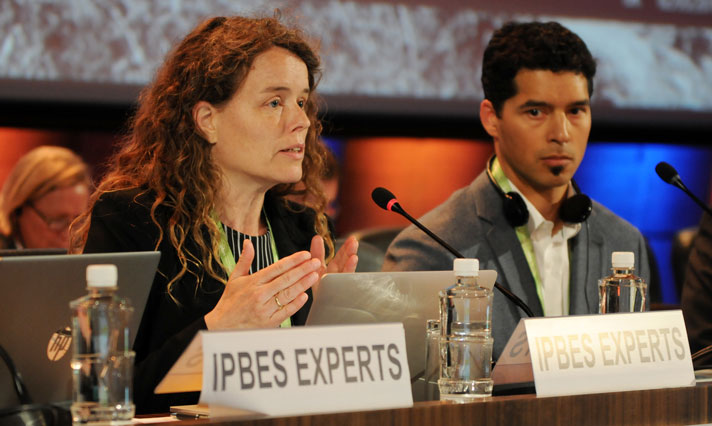 “The health of ecosystems on which we, and all other species, depend is deteriorating more rapidly than ever before,” says IPBES Chair Sir Bob Watson.

“We are eroding the very foundations of our economies, livelihoods, food security, health and quality of life worldwide.” Watson: “The Report also tells us that it is not too late to make a difference, but only if we start now at every level, from the local to global. Through ‘transformative change’, nature can still be conserved and restored.”

International goals out of reach

The assessment shows that there is progress on just 4 of the 20 current international biodiversity goals, the so-called Aichi Biodiversity Targets, and that it is likely that most targets will not be realised by the 2020 deadline. The main causes are land-use change, for instance by deforestation caused by expansion of agriculture, the overexploitation of species for instance by fishing, and the introduction of invasive species. The impact of climate change is expected to increase over the coming decades.

The 132 IPBES-member states discussed the Global Assessment Report during the 7th session of the IPBES plenary meeting in Paris last week (29 April – 4 May). During this meeting they accepted the report and adopted its summary for policy makers. It is the most comprehensive report on biodiversity ever completed. It is the first intergovernmental Report of its kind and builds on the landmark Millennium Ecosystem Assessment of 2005. The Assessment represents an important milestone on the path to the expected decision in November 2020 for a new global biodiversity agreement under the UN-biodiversity convention. It is now time for nations, the private sector, and civil society, both in The Netherlands and worldwide, to take the next steps by building on this report to develop policy and take action on the ground.

Effects for poor and vulnerable people

The report pays significant attention to the effects of the decline of nature on the poorest and most vulnerable people worldwide. A further decline of nature would undermine progress on UN Sustainable Development Goals on poverty, hunger, health, water, cities, climate, oceans, land-use. The IPBES Global Assessment also provides insights into the contributions of nature to the realisation of the Paris Agreement on climate change.

Based on scenario-analysis, natural- and social scientific insights, and indigenous and local knowledge systems, the report shows that only if the underlying causes of the loss of biodiversity are addressed, conservation and sustainable use of nature can still be realised.

This requires transformative change. According to the report, this means a fundamental, system-wide reorganization of technological, economic and social factors, including a shift in paradigms, goals and values: our society and economy must be transformed to be more sustainable. The report states that only if we, as individuals and society as a whole, change our relationship with nature and our appreciation of nature, we will be able to protect nature for ourselves and other species. This means, for instance, reforming unsustainable agriculture, fishing and agricultural subsidies.

The challenge for the IPBES Global Assessment was to combine and integrate scientific knowledge in a manner that is relevant for all its member states. The IPBES member states negotiated the text of the summary for policy makers last week in order to make the conclusions of the summary useful to everyone. In this manner, the assessment acts as a much-needed bridge between science and policy.