He studied Political Science in Nijmegen, where he later became head of Internationalisation, a position from which he helped initiate NSM Focus. Despite his many years at the Nijmegen School of Management, this is the first time he appears in ‘Interview with an alumnus’. High time for a trip down memory lane with Rob Verhofstad, Chair of the Executive Board of HAN University of Applied Sciences.

What was your motivation for studying Political Science?

“I had a strong interest in urban planning, which first led me to a study programme in Spatial Planning, but that turned out to be different from what I expected. Thanks to the broad structure of Policy Sciences, as the Faculty was called until 2002, I had by then been introduced to Political Science. It was the early 1990s: the Berlin Wall was gone, and the end of the Soviet Union had been heralded by the coup against Gorbachev – it was a turbulent time, one that I wanted to understand better. So I switched to Political Science.” 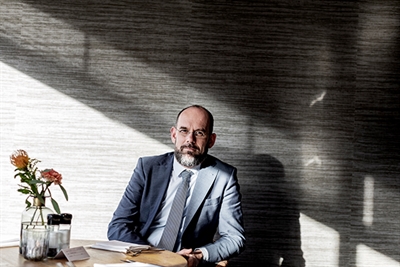 What good memories do you have of your student days?

“So many! But let me share two. First of all, I’ll never forget the course in Peace Issues taught by former lecturer Leon Wecke (who passed away in 2015). The developments he talked about were all hot off the press. It was all happening right there and then, and he explained it in such a wonderful way. The second thing I vividly remember is a talk with student advisor Hans Slomp. I was worried about whether I’d chosen the right study programme. What would my future prospects be with this degree? ‘Don’t worry,’ he said. ‘If it’s what you’re interested in, it will all work out.’ Simple but wise advice that helped me realise that I’d have a better chance as a good Political Science graduate than a mediocre Spatial Planning one.”

After graduating, you worked at the Education Centre for a while, boosting the inflow of new students. You also started teaching and were ultimately appointed head of Internationalisation. And so the Nijmegen School of Management remained your home base for twelve years.

“The small scale, the interesting lecturers, the encouragement from all sides, the pleasant atmosphere. I felt completely at home. Those were twelve exceptionally beautiful years.”

Do you miss Radboud University?

“Fortunately, I don’t have to. HAN and Radboud University work together on many fronts, for example in fulfilling the Dutch government’s mandate to ensure that every student ends up in the right place. If someone wants to switch programmes or relocate from HAN to Radboud University or vice versa, we work together to make the transition as smooth as possible. A central role for the student, personal attention, as little unnecessary bureaucracy or time loss as possible; in other words: a joint customised approach.

In this context, I would also like to mention our research. HAN and Radboud University both work across the entire width of the spectrum: from very fundamental to highly practical research. Our results can form the starting point for academic research, and conversely, we can test theories from academic research in practice. We’re not competitors, but instead complement each other and work on the same social issues.”

What is your advice for today’s students?

“As Hans Slomp once told me: follow your fascination.”

Is that what led you at a certain point to become a marriage officiant?

“Ha ha, yes, that and the fact that I once attended a wedding as a guest, and felt that the marriage officiant had done a very poor job. Couldn’t I do better? So, at age 22, I became the youngest marriage officiant of Gelderland, possibly of the Netherlands. I did it for about seventeen years. It was great fun, and I learned a lot from it. Speaking in public, of course, but most of all: really looking at the person in front of you, and asking yourself: What do we have in common? Putting yourself at the service of the moment and the occasion.” \JvdB