She frequently receives mail addressed to Mr E.M. Sent. In the schoolyard, she was more than once complimented on her ability to combine work and motherhood. And on the Senate’s voting lists, her name was always preceded by ‘Mrs’ – while those of her male colleagues appeared without ‘Mr’. Professor Esther-Mirjam Sent is more the type to fight to challenge the status quo than to resign herself.

For ten years, Sent was a Senator on behalf of the PvdA. For the past six months, she has been Chair of the Party. “In English-language documents, my name is often accompanied by ‘chairman’, in which case I refuse to sign. I only sign documents where it says ‘chairperson’. Not to be difficult for the sake of being difficult, but to make a point. The default setting is still too often ‘man’.”

It is frustrating that so many people automatically associate the title of professor with a man. But the reality is not much rosier. Women still earn 14% less per hour than men. Only 14 % of administrators responsible for day-to-day management are women, and 47% of women are not financially independent. 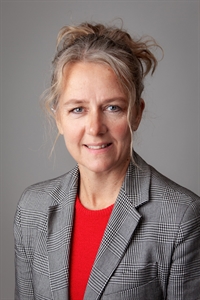 “Women with similar experience in the same position still often earn less than men. I experienced this myself years ago, and to be honest, at the time, I just resigned myself to it. I wouldn’t take such a stance now. Among other things because of their lower income, women on average accrue €400 less pension per month. You sometimes hear that ‘it’s the woman’s own choice to work less,’ but things aren’t that simple. The Netherlands has a long history of cultural expectations that mothers will reduce their working hours once children are born. This has resulted in all sorts of financial constructions to facilitate women staying at home part-time. The modern-day norm is a variant of the traditional bread-winner model, namely the ‘anderhalfverdieners’: couples combining a full-time job and a part-time job, with men working outside the home, and women combining childcare and household tasks with a smaller job. Add to this the fact that in the Netherlands, childcare is both relatively expensive and doesn’t have a very good reputation.”

Professor Yvonne Benschop recently said in FM Focus that it was time to knock the man as ‘ideal employee’ down from his pedestal.

“Exactly. Research shows time and again that mixed teams deliver better results than teams consisting of only men or women. But consciously and unconsciously, we still often look at quality through a gender lens. Here is an example of this kind of gender bias: if more women than men respond to a vacancy, the general rating of the position drops. If most of the candidates are male, it’s the rating of the female candidates that goes down. Plus, we give preference to candidates who resemble us. Which is a strong argument in favour of a women’s quota. Here is another example: we say about men who take Wednesdays off to care for their children that they are having a ‘daddy day’, but we never talk about ‘mummy days’. We have working mothers, but no working fathers. Such implicit prejudices make it hard to create diversity.”

What is needed from others – governments, employers, men, and women – to turn the tide?

“A whole range of things, because there’s still a lot to be done. The government can provide good-quality, free childcare. Employers should take a stance for an open and fair organisational culture in which working part-time is just as natural for men as for women, and differences in salary are transparent. It’s also very important that men become aware of the crucial role they play in this context. At the University, we once started a track in which junior women were coached by senior women. It was good, but it only became really interesting when someone suggested having junior women coached by senior men. From that moment onwards, the men experienced at close range the obstacles that women encounter in their work and career. And on the home front, there’s still a lot to do before we have a fair division of household and care tasks.”

On average, women devote one-and-a-half times more time to these tasks than men.

“During lockdown, men did take on more care tasks than before, but since the total volume of these tasks increased, ultimately women still ended up doing more. Do you know what makes this whole thing even harder? People are unrealistically optimistic.”

What do you mean by that?

“Here’s an example: we know that one in three marriages ends in divorce, but we somehow still assume that our own marriage will last. The consequence is that many women end up in financial dire straits when they do get divorced.”

It’s enough to make you despair.

“In my case, hope always wins over indignation or dejection, because I can influence this issue through my work. I carry out research on the position of women on the labour market, I am vocal in the media, I chaired the election programme committee, was able to contribute to the quota legislation in the Senate, etc. I channel my combativeness into research and action, which will hopefully lead to change and improvement.”

Esther-Mirjam Sent and Irene van Staveren wrote ‘De keukentafel en de keukendeur. Klassenverschillen in de verdeling van huishoudelijke arbeid’ (‘The kitchen table and the kitchen door. Class differences in the distribution of household tasks’) in Tijdschrift voor Genderstudies, June 2020. (The English-language version of this publication is currently under review by a journal). The essence of their argument: in the past ten years, women have increased their working hours and their average education level. However, the division of unpaid household labour has hardly changed: women still devote substantially more time to it than men. “My greatest concern is for women in low-income households. They don’t have the financial means to pay for childcare and household help.”