The world held its breath when the US assassinated the Iranian general Qasem Soleimani earlier this year. Political Science professor Bertjan Verbeek is not surprised about the incident. “It is a warning to an Iran that, for some countries, it is growing too powerful.” 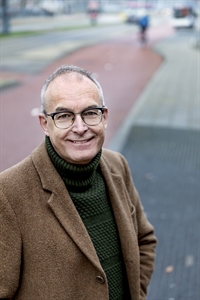 The US and Iran have been enemies since the Islamic Revolution of 1979. At that time, the pro-western Shah was deposed and Iran changed into a country where Shi’ite Muslim spiritual leaders occupy dominant positions. Verbeek mentions another important year: 2003. “A coalition led by the US entered Iraq, toppled Saddam Hussein’s regime, and brought in a new political system. Subsequently, Iraq imploded, a power vacuum was created, and Islamic State was able to conquer large parts of the country and advance to Syria.

Iran supported the Syrian leader Assad, and began fighting against IS. During that struggle, Iran and the US were allies for a time. However, now that the terrorist group appears to have been defeated, the old hostility is flaring up again. Verbeek: “Iran has strong ties to Hezbollah, to the Houthi in Yemen, and allegedly to Hamas as well. For some countries. Iran has too much influence: not only for the US, but also for Saudi Arabia, Israel, and Turkey.”

Verbeek is not surprised about the escalation. “The conflict has been getting worse for a while: Iran boarded a number of oil tankers last year, downed an American drone, and is likely involved in the shelling of American targets in Iraq. The US had to respond at some point. The elimination of Soleimani is a warning to Iran, with the message: do not believe that you can be the most powerful player in the region.”

The crucial question is what will happen next. “Neither country seems to be aiming for war,” says Verbeek. “But with the current regional power dynamics, a new confrontation seems inevitable. Perhaps the Revolutionary Guards will attack oil tankers again, or maybe Israel will re-engage in bombing Iranian troops in Syria. I’m fairly confident that something will eventually happen. Unless IS regroups, and the different adversaries need each other once more.”

Some fear that escalation will bring Iran one step closer to nuclear weapons. Verbeek sheds a nuanced light on that statement. “Iran has two political branches: one conservative and theocratic, and the other somewhat more enlightened. The theocratic branch sees the nuclear energy program as the road to Iranian autonomy, but sometimes also uses it as a threat. On the other hand, the enlightened branch, seeking to improve the material well-being of Iranian citizens, wants more cooperation with the West, with the hope that sanctions will become less stringent, and more prosperity will develop. They are prepared to make concessions with regard to the nuclear energy program.”

Verbeek also points out another factor: the growing influence of China in the region. “Iran and China are increasingly looking to become closer. Together with Russia they are organising joint naval exercises, and China will be investing hundreds of billions into Iran over the next few years. That will in effect undermine the international sanctions. At the same time, China is setting up bases in various locations, such as in Myanmar, Pakistan, and Djibouti. By doing so, China is inching its way towards the Middle East. The region seems to be transforming into a global playing field. This will make the situation even more complex in the future.” /MvZ

Do you want to know more? Listen to the podcast A Sip of Science of the Nijmegen School of Management. In this episode, Bertjan Verbeek analyses the conflict between Iran and the US. You can find our podcast on Spotify as well.