At the start of this year, Professor of Business Economics Joris Knoben was appointed trend analyst at the Dutch Chamber of Commerce. His job is to analyse and interpret their monthly reports. ‘I see it as my duty to share scientific knowledge.’

Since 1 January 2021, Knoben has a new job on the side: trend analyst at the Chamber of Commerce. The Chamber of Commerce publishes a monthly report on business dynamics in the Netherlands. “This report maps the number of start-ups, discontinued businesses and bankruptcies, and splits the figures according to sector and region. Three professors then an 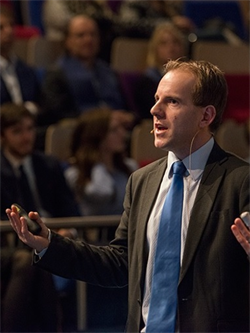 alyse the data and suggest explanations and potential consequences. We only have 24 hours to complete the analysis, so I have to continuously monitor current developments and studies.”

This year’s first report revealed a remarkably high number of start-ups. Based on entrepreneurship literature Knoben knows that there are roughly two kinds of start-up entrepreneurs: those who wholeheartedly believe in their new venture and those who see no other way out. “We see increasingly more examples of the second kind. People in the cultural and catering sectors in particular are forced to look for new opportunities. Think of orchestra musicians teaching music lessons as freelancers, or restaurant chefs preparing and delivering meals from home. Being aware of these developments makes it easier to interpret the trends.”

Knoben’s analysis appears in a news release distributed by the Chamber of Commerce. “Many media take over this information, although the release is usually only the beginning. Following the January report, national media like De Telegraaf and Trouw called to ask for more information, and regional media wanted to know, for example, what the trends meant for Limburg or North Holland.”

As a researcher, Knoben sees it as his duty to share knowledge. “For me, but also for the Faculty and Radboud University as a whole, it’s important to be visible in the media and to contribute to the societal debates.”

Knoben’s students also benefit from his new position, albeit indirectly. “In my lectures I can more specifically address current developments. Also, my work as a trend analyst increases my visibility within my own network. For example, I recently got a phone call from someone I’ve known for a long time but hadn’t spoken to in a while. This person now works at Rabo Research, the research department of Rabobank, and he was looking for a student for an internship project. As a result, one of my students is now investigating the commercial dynamics in the Arnhem-Nijmegen-Wageningen region.”

Knoben’s new analysis will appear in April. Can he lift a tip of the veil for us? “A lot will depend on whether we come out of lockdown this spring. If the cultural, recreational and catering sectors have a good season this spring and summer we’ll see completely different developments than if they have to remain closed until the late summer.”