The Radboud University Centre for Analytical Modelling in the Social Sciences and Humanities (RUCAM-SSH) brings together researchers who work with analytical modelling. This analytical aspect is what sets the centre apart. And many of their projects lead to practical policy advice. 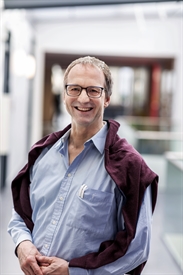 “Analytical modelling is the use of mathematically oriented models to capture real-world phenomena
and analyse effects and trade-offs”, says Frank
Bohn. He is the initiator and one of the two principle investigators of the centre.

“Researchers are usually either mathematicians or economists”, adds Wadim Zudilin, the other principle investigator. “The idea was to hire PhDs and
postdocs with both backgrounds. That was a real challenge, but we succeeded in the end.”

“There is no shortage of researchers doing modelling”, says Daniel Waters, one of two PhDs at the centre. “It is the analytical aspect that sets us apart. We do not try to populate some sort of simulation or data that we have collected from surveys. We look at the structure and characteristics of things and how they function intrinsically.”

As far as research is concerned the centre has both internal and external projects”, says Rein van Alebeek, the other PhD. “Internal projects are closely related to democracy: the modelling of concepts of sociological patterns, the way we see for example polarisation and fragmentation in our society. For external projects, we collaborate with empirical researchers who do not have a mathematical background, but would nonetheless like to expand into the realm of analytical modelbuilding.”

Van Alebeek currently works on a multiple-principals-one-agent-problem. “The idea is that we have different parties from different municipalities collectively deciding on outsourcing an activity, say garbage collecting. The fact that there are multiple principals who all try to achieve their own goals leads to inefficiencies. The agent, for example a garbage collection company, may get more freedom than it should. A public administration researcher asked us to build a mathematical game theoretic model for this.”

In the meantime, Waters is building a model around the concept of a universal basic income. “An empirical scientist would give people a sum of money, analyse how that affects them, and write a paper about it. My approach is different: I am not that interested in the final outcome, but more in the range of possibilities that might happen and the mechanisms that would be responsible for each of them happening. I try to tease apart all individual mechanisms, to then give advice to a government that might be considering a universal basic income.”

“Policy recommendations are a key factor in all our projects”, adds Bohn. “In Rein’s project the policy recommendation would be about how principals should work together to prevent that agents do what they want, without being controlled. In Daniel’s project the advice would be: how could an unconditional basic income be set up – if at all – so that it is effective and leads to motivation instead of shirking?”

The centre has all sorts of plans for the future. “First, we want to organise more seminars”, says Zudilin. “We already had one in June. It attracted people from different faculties and we had a great discussion afterwards.” Bohn: “Secondly, we are thinking about developing a joint master programme in mathematics and economics. We really believe there is a need for that.” “I know several mathematics students who would be interested”, adds Van Alebeek. “There are some courses on mathematical microeconomics and mathematical finance. But students who want more now often go to Amsterdam or Utrecht.” Bohn: “It would be great if such a programme could keep them in Nijmegen.”