NSM Focus | Sustainability and the role of the citizen cooperative

What role do citizens play in sustainable energy projects? How do you prevent such projects from becoming the exclusive domain of those with higher education? How can those in science and practice benefit from each other’s knowledge? A conversation between scientist Mark Wiering and practitioner Paul Janssen, “in the shadow” of Nijmegen’s windmills. 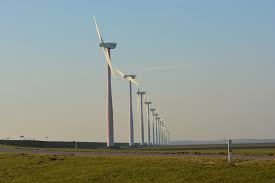 There is a celebration happening at the Windpark Nijmegen-Betuwe, near the A15: two days full of lectures, experiments, debates, and musical performances. Five years ago, the citizen cooperative WindpowerNjmegen was founded. It took the initiative to set up the four windmills that have been producing energy here since the end of 2016.

Mark Wiering, Associate Professor in the Geography, Spatial Planning, and Environment department and Paul Janssen, alumnus and sustainable energy consultant at Pondera Consult, have both been actively involved in the wind park. Wiering is a member of the cooperative and helped work on the lustrum festival. Janssen was active as a consultant during the realisation of the park. Janssen: “The people here did not simply sit behind closed doors thinking about how things needed to be, rather they went out and learned from practice. It’s a great example of how a citizen cooperative can be successful.”

The initiative is perfectly in line with Wiering’s research interests. “We are facing enormous challenges: the energy transition, the move to a circular economy, and making agriculture more sustainable. I primarily examine the role that citizens and civil society play in this process.”

One of the reasons why the Netherlands did not need to consider sustainable energy for so long was the presence of cheap gas. Wiering: “In the 1980s, the first citizen groups which wanted to work autonomously on wind parks sprang up. After that, the area remained quiet for a long time. That is until the economic crisis of 2008 resulted in an explosion of citizen cooperatives.

“How did that happen? That’s a tough question”, says Wiering. “The crisis stamped out our belief that the market will solve everything. We had already realised by then that the government doesn’t solve everything. Furthermore, the theme of climate change became a current issue and the indications that natural gas in the Netherlands has its drawbacks steadily increased. Citizens began to sense that it was time to take action themselves.”

“However, cooperative energy projects are still the exclusive domain of rich, white people with higher education”, says Janssen. He advises different municipalities in the creation of energy plans and strategies, which are often presented at community centres. “So, the attendees are hardly a cross-section of society. How do you involve other parts of the population in this theme?"

Wiering thinks that it is a valid question. “For every transformation, you need people who lead the pack: people who embrace new technologies such as electric cars and heat pumps. But there are also people who think, ‘I’ll just wait a bit.’ It’s important that all parties - the municipality, housing corporations, citizens, energy companies - work together and bring energy themes as close to the citizen as possible.”

Wiering points out the approach of the Municipality of Nijmegen. It works on projects regarding energy conservation and electric heating and chooses different neighbourhoods to implement them in: not just Hengstdal and Bottendaal, where many “pack leaders” live, but also in Zwanenveld. "It makes a lot of sense. It’s also good to link the transformation to other issues in that neighbourhood. Suppose that the windows have to be replaced. If so, people should consider double glazing.

Generating support and involving citizens in sustainable energy are two aspects which Janssen deals with as a consultant every week. “Do I turn to the university for advice? That actually should happen. However, a consultancy firm is a very practical organisation which comes up with solutions within a certain time frame and within the available budget. Our times don’t always line up with those of scientific research.”

Janssen’s employer does have close contact with science in other ways. “For example, we facilitate research projects for graduating students. Students who attend Mark’s lectures regularly complete internships with us.” Furthermore, Janssen makes intensive use of the knowledge he gained as a student. “If I develop an energy plan, we always consider who the stakeholders are and how to get them involved in our plans. I learned my approach to this at the university."

Janssen is alluding to a negotiating game from the Bachelor’s programme. Using a case - for example, there are plans for a new wind park, but residents in the surrounding towns are opposed to it - students must get the right parties to the negotiating table. Wiering: “After that, they analyse the formal regulations of the government, the informal rules of cooperation, the available resources, such as funding and knowledge from market parties, and support and any potential citizen funding. The students also research various discourses, such as “What are the interests of the protesting people who live there and is there something else at work?” With these ingredients, rules, resources, actors, and discourses, students must obtain a good picture of what happens in practice.” Janssen: “I still remember that game well and I use the experience I gained from it practically every day.”

But how does Wiering use knowledge from practice? “Paul has a great deal of data available. He can tell you that the municipality of Nijmegen consumes approximately 11,000 terajoules of energy annually. This is equivalent to the electricity production of about 250 wind parks or 2,500 hectares of solar panels. This enables you to see right away that it can’t be done this way and you have to start looking for alternatives if you want to be completely energy neutral by 2045. Figures like that serve as a reality check. As a scientist, you can have incredible visions for the future, but ultimately your methods have to remain applied and focused on society. This is why the dialogue between science and practice is enormously important.”