This month, the Social and Economic Council of the Netherlands will receive the first copy of the Jaarboek Migratie en Integratie (annual report on immigration and integration). Radboud researcher Pascal Beckers is one of the editors: “Immigrants can strengthen the resilience of our society.”

The surge of refugees into Europe continues to dominate the news: this week it is about the freight ships waiting out at sea with hundreds of people who are not welcome in Europe. Pascal Beckers sees a solution for this “humanitarian disaster”: by placing more emphasis on the positive contributions that refugees offer our society. He is pleased that various provinces are getting involved in the debate by identifying those with refugee status as a solution for the shortages in the labour market. Beckers uses Zeeland province as an example, where they want to approach the urgent shortage of staff by assisting thousands of people with refugee status in obtaining work. “The recent group of refugees is relatively well educated and as such, has a greater chance of success than the long-term unemployed people in the files of the UWV (Dutch employee insurance agency), which is a group that is difficult to find work for.”

“The need is great”

The debate over refugee status holders and asylum seekers has been negative for years in Beckers’ opinion. “We have to stress in much stronger terms the fact that these people are needed here. The need in the Netherlands is now so great that we really have to consider changing our view of immigrants.” Beckers sees cultural and economic advantages. “In the Netherlands, many debates have come to a standstill. Bringing in newcomers may free up the discussion; they can increase our resilience.” However, integration into society is difficult, as demonstrated through research into the “refugee gap”: the time it takes before a group has been included in society. Beckers knows that the obstacles are substantial. He refers to mental suffering among the status holders. “One in four suffers from depression, post-traumatic stress, or an anxiety disorder. That makes sense when you hear what they have been through. And then you hear people in the Netherlands say: “Go get a job.” That's not how it works. It takes years. Language difficulties play a part as well.”

The good news is that the “refugee gap” is shrinking: the status holders from recent years are integrating faster than migrant workers from previous generations. “Intensive guidance is imperative,” says Beckers. “Remember that this group did not come here to work, so we have push a bit harder for the transition towards work.” Beckers is involved in an initiative by Radboud University to help status holders transition into the Dutch labour market better. He paints a picture of how staggeringly different the backgrounds are: in the countries of origin, rules and regulations are largely informal, while in the Netherlands there is extensive legislation. In addition, the group culture in the countries of origin is diametrically opposed to the individualised approach in the Netherlands. “In order to find work, we have to sell ourselves. Explain that to someone who came here from Syria at 30 years old. They are not at all accustomed to making themselves stand out at a social networking event.” 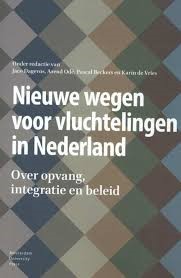