Eric Jongmans (64) graduated back in the 1970s in human geography and spatial planning. He worked in public administration for over forty years. He has now achieved the crown on his career: the position of secretary-director at Hollandse Delta water board.

How do you feel when you look back on your days as a student? 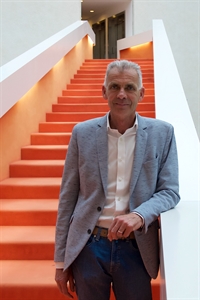 "I thought I was going to a respectable Catholic university but in 1972, I arrived in the middle of students strikes and occupations. As soon as you came through the door, you were asked to join the communist unity movement, as it were. In those days, tuition fees had to be paid in cash. But when my father and I went to the assembly hall to pay, it had been occupied.

I wanted to study a subject about people and their relation to the public space, so I chose human geography. After my undergraduate studies, I switched to spatial planning. A spatial planner tries to distribute and design the little space available to the best of their abilities. This always takes place in collaborative partnerships: a spatial planner can do nothing alone. They need urban designers, traffic experts and demographers to be able to refurbish a district, city or village together. I always found that interaction really interesting."

Were there things you missed during your time as a student?

"There was very little focus on social skills. We did learn to collaborate and give presentations, but we got very little feedback on the way we collaborated or presented. I learned those skills later, in practice."

What course did your career take after you graduated?

"I started working at the municipality of Wijchen as a participation coordinator in 1979. In the ten years which followed I held various positions, culminating in that of deputy town clerk. That period was really my apprenticeship. Wijchen was growing rapidly, there was a municipal redivision and we were given municipal police. That provided all sorts of administrative challenges. I learned to weigh vested interests, make decisions and be held accountable for them. I benefited greatly from that.

When I left Wijchen, I was a town clerk for thirteen years in Oudewater, Ijsselstein and Heusden respectively. In 2002, I took up the position of secretary-director at the Rivierenland water board. There too, a redivision was taking place: all the small water boards had to merge into larger, more professional units. This organisational challenge appealed enormously to me."

You didn't have a particular fascination for water?

"Not when I first started, it grew on me. I see how important water is, on a daily basis, and how well water management is organised in the Netherlands. There is an enormous amount of expertise. Biologists, ecologists and hydraulic engineers join forces to keep an area dry and wet alternately. Moreover, they weigh up the various vested interests. Farmers have interests which are very different to those of citizens or nature. That's why you see that typical Dutch polder model of consensus democracy perfectly in water authorities."

You're now working for another water board.

"That's right. I had taken a voluntary step back at Rivierenland, in 2015: no longer working as secretary-director, but as director of programmes, for dike improvement, for example. I wanted a position which was more hands-on and less administrative. But early in March, Hollandse Delta phoned me. In just a short time, both the secretary-director and the dike reeve had left. In addition, there were backlogs in water purification. They desperately needed both administrative and official leadership. It was an ideal opportunity for me to put my forty years of experience at the disposal of an organisation. So now I'm secretary-director again after all. This is the crown on my career. I'll be retiring in two years, but before I do, I want to help build Hollandse Delta into a dynamic, proud organisation and offer the staff prospects once more."

You've always worked in public administration. Was that a conscious choice?

"Yes. I've always felt drawn to public interests. The interaction between administration, politics and official organisations interests me. Sadly, there has been much cynicism in recent times, both in politics and in society, about what civil servants do, or don't do. I'm proud of my public service. I'm proud of the fact that the Netherlands has a high-quality, efficient civil service. I see expert staff around me working on very complex issues."

What career advice would you give students now?

"Start early in exploring the employment market. Take your plans for the future into consideration when choosing subjects, but make the connection to professional practice too. Make sure you get a foot in the door with organisations, that you have someone who can help you really get to know such an organisation. And don't let yourself be labelled too quickly: during your study, allow yourself to explore a broader range, so that you discover what suits you best. Take a subject at another faculty, or another university, for example. I always found that very valuable. And I believe that even with the current pressure associated with taking a degree programme, this is still possible."