After precisely 25 years, Pieter Leroy is retiring as professor of Political Sciences of the Environment. His successor, Ingrid Visseren-Hamakers, took up office in May. "I try to find the balance between traditional science on the one hand and collaborating with partners to make a difference in society on the other." 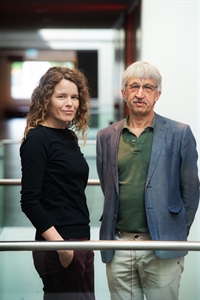 It was the heyday of environmental policy. "We had a great many orders, we were committed to raising the substantive level of environmental policy and our students went on to be successful." That bubble managed to stay buoyant until the turn of the century, but after that the environment lost its place on agendas, in part due to the consequences of the terrorist attacks in New York and the murder of Dutch politician Pim Fortuyn. "Student numbers fell, and the Executive Board lost some of its interest in environmental issues. Then the natural science environmental studies programme at the Faculty of Science was terminated and we had to fight to keep our own programme afloat. That was, without a doubt, the most difficult period of my professorship.”

These days, the environment is a booming business once again. "Student numbers have doubled in recent years and the students are very committed. At the same time, our study programme has become less focused on administrative studies and more on social change. I see that in the graduates too. They used to go on to take up policy-making positions and now they are real change agents. At a local level, they help people to stop using natural gas, build windmills and so on."

Ingrid Visseren recognises some of Leroy's story. She was a student in the 1990s, studying business administration (Rotterdam) and environmental sciences (Utrecht). "I can remember that we students organised a week of action focused on the Rio conference in 1992." After graduating, she worked for various NGOs and for the province of Zuid-Holland. But the wheels of bureaucracy turned too slowly for Visseren. "I was angry, and I wanted to make the world better." She made the move to Greenpeace, where she worked for four years as a campaigner. "Precisely in that period, I regained my interest in the study. Greenpeace does wonderful work as a catalyst for change. But I noticed it was a role that didn't suit me that well."

Visseren wrote a thesis about the role of partnerships in international biodiversity policy - with Leroy as one of her supervisors - and "absolutely fell in love with the scientific process". She started work as an assistant professor in Wageningen, worked for four and a half years in the US and is now professor of Environmental Governance and Politics in Nijmegen. "A great place, especially since it's such a comprehensive university. There's expertise in all fields with which to work on sustainability. This is as good as it gets!"

Visseren will be looking closely in the next period at how the department is running. "Both the Bachelor’s and Master’s degree programmes are doing well, but there's always room for improvement. I'll also be trying to find the balance between traditional science on the one hand and collaborating with partners to make a difference in society on the other. I see it as a three-legged bar stool: education, research and impact. For it to stand level, the three legs have to be in balance."

Leroy is thrilled with his successor. "We are largely on the same page, although Ingrid is a little more optimistic about the changeability of the world. That might be an age thing. History has taught us that significant social change - the abolishment of slavery, the introduction of universal suffrage - takes between one and two hundred years to achieve. But we don't have that amount of time now. The earth is already going to rack and ruin."

"All the graphs are indeed still pointing in the wrong direction," Visseren admits. "But if we start the transformation now, we can still turn the tide. There is now broad support for the idea that an energy transition is necessary. We need to extend that energy transition to include agriculture, for example, and a sustainable design in cities; a broad social sustainability."

She believes it is crucial that such sustainability take shape in a socially responsible and just manner. "If you live in rented social housing or are out of work, but are being asked to pay more and more for energy, you're not going to accept that. So, the sustainability must bite in other places, such as industry and those in the high-income bracket."

Does Leroy have any advice for his successor? "No, I feel it's professionally fair to say: ‘You are the full professor now, I leave it to you, off you go!’ I'm very happy with Ingrid. We share the same views on education, research, the care of the department, wanting to make an impact. She's possibly a little angrier than I am, but that's not a bad thing in this particular field."