The oil industry should pay more attention to human and organizational aspects in order to fundamentally improve safety. The industry does not learn enough from oil spills because learning is a conflict of interests: “Parties try to protect or promote their interest and try – consciously or subconsciously – to exclude each other from the learning process.” This conclusion is the result of an investigation into the aftermath of the major oil spill caused by the Deepwater Horizon drilling rig disaster in 2010 conducted by Bruno Verweijen.

On 20 April 2010, the drilling rig Deepwater Horizon lost control of the Macondo well in the Gulf of Mexico. The resulting explosion killed eleven people and resulted in the largest offshore oil spill in world history. The spill had a disastrous effect on ecosystems, local communities and businesses.

Researcher Bruno Verweijen compared the Macondo spill with other offshore drilling incidents and discovered that the errors contributing to the Macondo calamity occur more often in this industry. Some even contributed to various other large oil spills and near misses (incidents where a disaster almost occurred).

“The Macondo spill caused a crisis in worldwide offshore drilling and not just for BP, Transocean and Halliburton, the companies directly involved. Even in Europe, interested parties saw the need to review risk management practices.” Verweijen studied how these parties in the North Sea region learned from the spill. He analysed publicly available documents and interviewed 43 safety professionals working for various interested parties in the European oil industry such as the European Commission, oil companies, oil industry associations and unions. 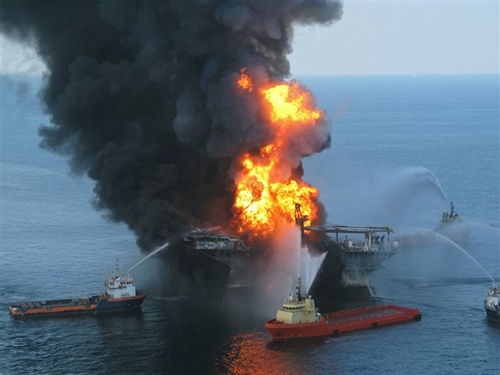 “Although learning from spills is a process in which various parties collaborate to try and improve industry safety, it also appeared that learning is a power struggle”, says Verweijen. “This influenced the lessons that were ultimately learned and the ones that were ignored.”

Although various parties tried to implement radical changes, for example introducing knowledge about organizational and human factors, the oil industry mainly tightened existing, technical practices and expertise. As was customary after spills, technical safety aspects, such as procedures and machinery, were improved.

“According to the prevalent technical outlook in the oil industry, drilling platforms are very safe”, says Verweijen. “However, much can be improved in other areas. Technology is only part of the problem. Other important factors impinging on safety are the human aspect – for example, the way in which offshore personnel respond to stressful situations – and organizational issues such as work pressure and corporate culture. An understanding of these factors is still in its infancy in the technology-dominated oil industry”, says Verweijen.

More variation in knowledge is required

Because Verweijen noticed that similar errors occur more often in drilling incidents, he recommends that “the oil industry as a whole must learn from the Macondo spill, not just the companies that were directly involved in the disaster. Professional risk management training for crews in the entire industry is one of the options.

In addition, people with wider backgrounds should be employed to address this type of complex risk management problems, such as sociologists, psychologists and business experts, who should also have decision-making powers.”

Bruno Verweijen was an external PhD candidate who obtained his PhD on September 27. His supervisor was Kristina Lauche, professor of Organisational Design and Development at the Nijmegen School of Management.

This article was published on the website of the Radboud University.