More and more European countries are introducing measures to increase the number of women in senior positions. However, if countries fail to address the underlying problem – women's access to relevant business networks – the effects of these measures will remain limited. Economists Gaby Contreras and Katarzyna Burzynska explored the link between government measures, business networks and the number of women in senior positions in 32 countries.

Business networks are still the primary recruitment platform for corporate senior positions. Women have less access to these networks and are therefore less likely to be hired for senior positions. Contreras and Burzynska analysed the social networks of leading Dutch companies. “We identified who knows who based on information about positions, education and career,” says Burzynska. “We then used this information to identify networks.” 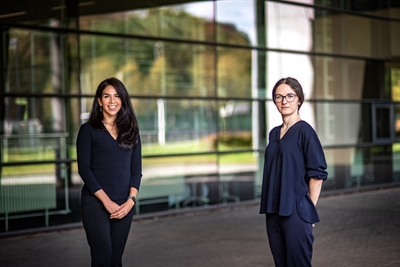 s went a step further than previous studies, which were mostly limited to listed companies. “We also analysed smaller companies, medical institutes, and even leisure activities, such as membership to a golf club or a Rotary club,” Burzynska continues.

The researchers also looked at the various measures countries are taking to increase the number of women in senior positions. “We made a distinction between two types of measures,” says Contreras. “Binding quotas and non-binding objectives. In the former, companies are sanctioned if they fail to meet the quota. Often in the form of a fine, but sometimes companies are forced to leave a vacancy unfilled if they're unable to find a suitable female candidate or they may even be taken off the stock exchange. Non-binding objectives have no sanctions. This is the preferred method in the Netherlands.”

The researchers see clear effects from the binding quota. “Before the introduction of this quota,” says Burzynska, “women did not benefit from these business networks as much as men, despite having the same background, experience and position in the network. After the introduction of the quota, there was no difference between men and women and women had the same opportunities to obtain a senior position,’ she says. “This isn’t the case for non-binding objectives,” adds Contreras. “In this case, there is still a difference in how men and women benefit from networks. These objectives often serve a symbolic purpose.”

The positive effects of a binding quota are the result of greater visibility. “The quota leads to more women being hired and greater visibility in the networks,” says Contreras. “When a senior position opens up, these employers are more likely to consider the women in their network.”

Despite the researchers’ cautious formulations, there seems to be no denying it: doing nothing is not an option and non-binding objectives have no effect, which means binding quotas are the only effective measure. “If you want to take action with no hope for change, non-binding objectives are fine,” says Contreras. “But if you want to see a real change, you have to seriously consider binding quotas.”

The research conducted by the economists is part of an ongoing project. “It's like a pipeline that keeps getting longer – we keep getting new ideas,” explains Contreras. “We want to further investigate the structure and dynamics of these networks,” adds Burzynska, “by asking questions like: what do the networks look like? Which positions do women hold (central or more periphery)? And do the networks change after the implementation of the quota?”

Contreras and Burzynska get a lot of satisfaction out of their research. “Not only because we feel personally involved in the topic,” says Burzynska, “but because the research has a clear social impact.” Contreras agrees. “It’s wonderful to do something that sparks discussion and debate. I hope it gets us further as a society.”

At our faculty, Hot Spot Gender focuses on these and similar issues. This research group develops, implements and evaluates research studies and interventions in collaboration with national and international organisations. For more information, visit ru.nl/imr/gender.

This story was previously featured in the annual FM Focus print edition that came out in November.