Borders in motion in frontier zones

I had the great opportunity of attending onsite the Asian Borderland Research Network (ABRN) Conference, Borderland Futures: Technologies, Zones and Co-existence. It was organized by the International Institute for Asian Studies (IIAS) and Reconciliation and Coexistence in Contact Zones (RCZZ) at Chung Ang University (Seoul, Korea) on 23-26 June.

I felt this conference was going to be something unforgettable from the first day; where the movie ‘Shadow Flowers’ played as an independent session on the opening conference day. Against the odds, this documentary movie tells a North Korean housewife who is forced to become a South Korean citizen. Though the political heat between the two states hinders her intention to go back to her family, she continues to struggle to return to North Korea risking her safety. By the end of the movie played, we (the participants) had the opportunity to meet the people in the movie, Ryon-hui Kim (the North Korean housewife) and Seung-jun Yi (the director).

Like other conferences, packed with stimulating topics and thought-provoking inspiration, every presentation competes with a dozen other presentations that are just as interesting. I guess it is normal if I have to bargain with myself over the topics that I am interested in. I particularly attended panels with a particular focus on infrastructural development on borders both in terms of immaterial and material, the technologies of state-making and mobility. This is because it is related to the latter point, which also shaped our panel.

Such a privilege that we could have two panels on the theme Borders in Motion in Frontier Zones. We had a combination of both presenters online and onsite.  Special thanks to Martin van der Velde, Associate Professor at the Department of Geography, Planning and Environment at Radboud University, The Netherlands, for initiating the panel theme. In opening our panel, van der Velde explains borders, or perhaps better the consequences of borders might be considered to be constantly moving and in motion. They are part of evolutionary processes as well as evolutionary processes themselves. Borders are also clearly relational and multiscalar, horizontally as well as vertical constructs and in order to grasp what is going on, have to be studied this way. This also gives rise to various ‘hidden’ borders that reflect frictions and discourses of practice coming out of all sorts of border-related mobility (physical or non-physical). These hidden borders will, in many cases, not correspond to nation-state sovereignty (or similarly defined territories) and be in motion creating frontiers, again both in more concrete physical interpretations as well as more abstract societal. Many thanks also to all panellists Shubanginee Singh (Jawaharlal Nehru University, IN), Nur Widiyanto (Ambarukmo Tourism Institute, ID), Ainul Fajri (Radboud Universiteit, NL), Tingshu Zhu (Mahidol University, TH) and Emily Hong (Haverford College, US) who highlighted the process of rapid change in Southeast Asia borderlands in their particular research areas. Everyone links their research to the concepts of borders in relational motion with other aspects of the geography growth and development, and the geopolitics surrounding these processes.

In my working article presentation on the topic cross-border interaction in the context of border region development in Krayan, Kalimantan Indonesia. My goal is to lay out the border crossing framework as an analytical tool for examining the relationship between border crossing practices and national identity sentiment. By emphasizing two types of border crossing, namely accepted and condoned, as analytical concept in understanding the link between social practices and State involvement in the cross-border interaction. As I finished my presentation I picked up a couple of questions from the audience ranging whether there is a particular order in applying the types of border crossing that are contested and condoned, and one clarification question regarding how did I get through the short of accessibility in my research area. The conversation about my research continues through email that is followed by a book title exchange entitled Delusional State by Nosheen Ali from one of my new fellow scholars. 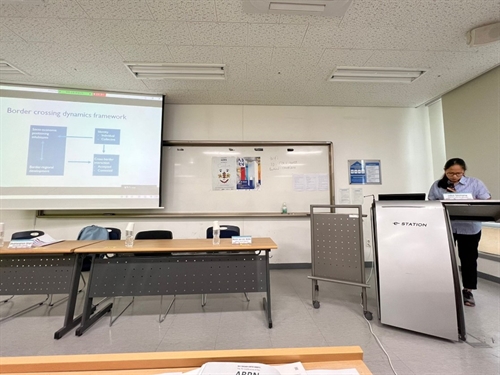 As I reflect on the conference theme, Borderland Futures: Technologies, Zones and Coexistences, I think one particular driving force that shape a borderland and can link the themes in the panels that I attended is the sense of tension. This had been represented in the last session of the conference through a documentary movie ‘Comfort’. Far from what the title may offer, the film reconstructs the life story of the deceased KIM Soonak with interviews with activists, archive videos, animation, and read-aloud testimony. It narrates a story of a survivor of sex slavery in the Japanese military. One could think that border-crossing may not necessarily limited to behavioural practices, it also manifested in memories. That the dark past lingers in the memory and is preserved by modern technology in the form of a documentary movie. This way it allows the past and present to coexist. That is memories in the past continue in the present day. The role of technology is prominent in transforming the borderland, in a sense, it preserves the history not to be forgotten but to remember until the foreseeable future. Such efforts are represented at best in the form of a DMZ (Demilitarized Zone) tour. To this point, though it was not integrated into the conference session, the DMZ tour provide a different way of looking at the past war in an aesthetic and futuristic representation. A very intriguing place to reflect on where the contentious past meets the uncertain calmness in the present. 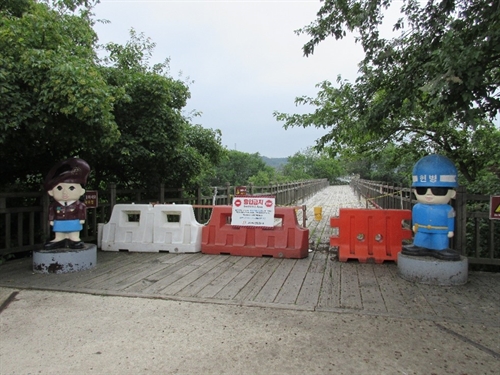 Figure 2. Freedom bridge at Imjingak resort, one of the most famous DMZ tourist spot. Freedom Bridge may has little architectural value but holds tremendous symbolic importance of ‘Return to Freedom’.

I have found the whole conference experience amazing – such a privilege for me to be able to attend. Especially after the recent Covid-19 relaxation for Indonesia nationals to travel abroad on the first of June. Back then I was concerned that I would not be able to join the conference in person due to the travel ban. It was a really great occasion after two years of postponement due to the Covid-19 restriction, thank you all. Coming up is the Southeast Asia Workshop series on the theme of Southeast Asian Highlands.

Citing from the conference book program, the Asian Borderlands Research Network has been developed in order to recognise the links, both historical and contemporary, that connect people in these borderlands, focusing on the border regions between South Asia, Central Asia, East Asia and Southeast Asia, where the prevailing notions of area studies have been particularly limiting. For me, and many conference attendees, it was an honour to interact with and listen to Willem van Schendel, Professor of History at the University of Amsterdam and the International Institute of Social History in the Netherlands. The moment van Schendel took the stage to deliver his introduction and background about ABRN to the audience, I have the feeling that science comes to life. Van Schendel did not present his work at this time but many panelist cited his enormous work in South Asia.

I am grateful for the microgrant provided to this conference by the GLOCAL research group, Nijmegen School of Management, Radboud University. This funding has allowed me to not only having the privilege to share my research but also to be in close interaction with other scholars.