Koen Smeets: an interdisciplinary jack-of-all-trades during the pandemic

Where some students have become less enterprising during the Covid-19 pandemic, Koen Smeets has only started doing more. In addition to completing the Radboud Honours Academy under the supervision of Prof. Esther-Mirjam Sent, he has written papers and his thesis under the supervision of Prof. Stefan Zeisberger, Prof. Ivan Boldyrev and Prof. Pim Haselager. Koen is also the secretary of Rethinking Economics NL, an organisation committed to interdisciplinary and pluralistic economic education. Within this organisation, the 23-year-old student at the Nijmegen School of Management has set up a remarkable interview series in which he talks to some of the big names in the academic world. 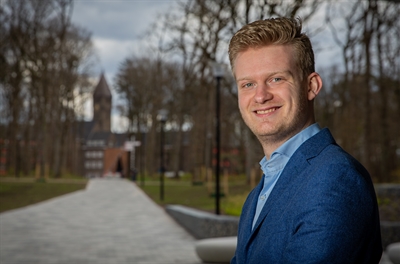 over the world, while others think that it won’t be that bad and everything will turn out alright in the end. In between, however, lies a gulf of different things that are seldom discussed. Why are economists less concerned about automation? How does technology affect the middle class and people who are not white males? To be able to answer these questions, it was important for me to interview a wide range of people so that we can analyse the complete picture.”

Different sides of the story

Koen’s passion for AI and creating the interview series started small. “I first asked my network of professors and entrepreneurs if they knew any interesting people. Through these connections, I ended up with international professors and simply thought ‘let’s take a chance’. I started asking all kinds of people for interviews and, slowly, the ball started rolling. Many people appeared to be interested in an interview with other academics. Although these people deal with the same subject, they all approach it differently. So we not only talk about economics, but also ethics, sociology and practical aspects, like healthcare. This creates a unique structure that both the viewers and the academics themselves enjoy.”

The complete picture Koen outlines in Socioeconomics of Disruptive Tech is one that he believes is often missing in education. “Economics is often almost seen as a mathematical field,” Koen says. “It is necessary to look beyond the theoretical models in economics textbooks because this is often not how the economy works in the real world. So the disruptive economic effects of technological progress will not automatically correct themselves, as many economists would argue. Jobs are also being lost, mainly in the middle class. There is huge inequality, which is causing life for certain groups of people to go from bad to worse. This has to do not only with technology, but with political choices, history and discrimination.”

Fortunately, academia is looking at the whole picture more and more. “Our Radboud University is one of the few universities in the Netherlands that offers 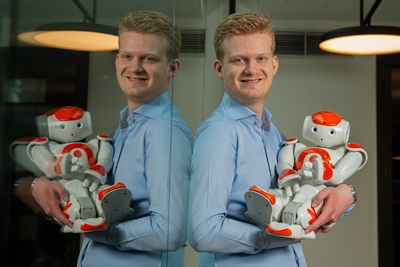 an Economy+ degree programme, with a focus on history, psychology and sociology, among other subjects,” says Koen. “In my opinion, there is a lot of value in taking a critical look at the assumptions that exist within economics, such as perfect rationality and the idea that the market can make fairer choices, by broadening the field and looking at its impact on the real world. Additionally, interesting courses like ‘Pluralisms in Economics’ are offered, which discuss the neo-classical of economics, as well as feminist economics, ecological economics and many other schools besides.”

Effects of the pandemic

With so much knowledge and international experience under his belt, Koen Smeets is no average Economics and Business Administration student. However, Covid-19 has also had an effect on him. “Besides the fact that my next step, travelling to Beijing, fell through, it has become much more difficult to make local connections during the pandemic. On the other hand, there are also positive aspects to everyone staying inside: people are more likely to accept requests to participate in an interview series, for example. Thousands of people have already watched the interviews, which is very special considering how specific the topics are. Moreover, I was able to make many contacts from around the world, including at top universities, which I would have not been able to do otherwise.”

“The most important piece of advice I can give my fellow students is this: try to create value in what you do. Don’t just write a paper and let it disappear into a filing cabinet, but create something that has practical impact. Nowadays, a lot of things are done online, which makes starting a business very accessible - a great opportunity to seize! Look out for what interests you and take a broader approach. Think of entrepreneurship or innovation, for example. Do not get discouraged too quickly and remember that although many things aren't possible at the moment, more opportunities may appear if you just keep looking out for them."