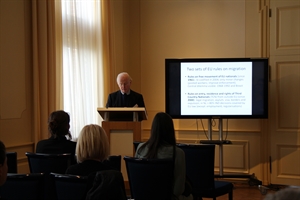 On the occasion of EUROPAL’s fifth anniversary, the seminar ‘Assessing Better Regulation in the European Union’ took place on Tuesday 18 December 2018, at Radboud University. A diverse group of researchers and practitioners, from the Netherlands and beyond, gathered to present their assessments of the EU’s Better Regulation (BR) programme. Has it so far been as effective and efficient in reality as it has regularly been proclaimed to be in EU policy statements?

After a word of welcome from Professor Ellen Mastenbroek (Radboud University, Co-director of EUROPAL), Professor Claudio Radaelli (University College London) kicked off the seminar with his keynote ‘EU Better Regulation: Achievements, limitations and prospects’. His main point was that BR is a matter of the multi-level polity, rather than the sole responsibility of the Commission. For it to work properly, member states, the Commission and the Council need to join forces. A BR programme pushed ‘from the top’ is bound to remain limited in effect, as its success will always remain critically dependent on proper execution ‘further down the line’.

In the subsequent panel round, chaired by Professor Henri de Waele (Radboud University), a selection of researchers and practitioners reflected on the first sub-theme ‘legislative quality’. First, Professor Helen Xanthaki (University College London) outlined an original argument for assessing the success of the BR programme itself on the basis of its own objectives: to what extent does it comply itself with its own principles and ambitions? She identified several shortcomings in this regard, and argued that ‘BR can benefit from the self-application of its own principles, guidelines, and tools’. The alternative only risks to alienate EU citizens further, warned Prof. Xanthaki. Suzanne van Melis (Dutch Ministry of Security and Justice) reflected on the panel’s theme from her experiences as a practitioner. To her mind, the key challenge for legal advisors for governments lies in the tradeoff between exploiting discretion on the one hand, and ensuring harmonization and influence on the other. She pointed out, however, that numerous legislative instruments leave national drafters little freedom anyway.

The next panel round focused on ‘consultations’. First, Dr. Pieter Zwaan (Radboud University) presented his findings from a recently completed research project on the Commission’s responses to consultation inputs. He asserted that the response rate could be improved, and that the responses could be made more specific and objective. Isabelle Schömann (Principal Advisor and Member of the EU’s Regulatory Scrutiny Board) discussed Dr. Zwaan’s research, giving an ‘insider’s view’. She concurred with most of Zwaan’s conclusions, while pointing to the need for more data.

In the afternoon, the panel rounds focused on the achievements of BR in specific policy fields. Professor Kees Groenendijk (Radboud University) started off with an assessment for the field of migration law. His analysis suggested that the intentions of BR and the actual results have come to stand in rather sharp contrast with each other. More specifically, he signaled a ‘disconnect between the highly pluralist understanding of policy making’ and current evaluation practices, which are markedly less pluralist in nature. Ciara Clerx (Immigration and Integration Service, Dutch Ministry of Security and Justice) wholeheartedly agreed with this, following from her personal experiences. Although clearly written legislation may give the illusion that practitioners can ‘tick the boxes’ and make a decision accordingly, she demonstrated how reality has proven to be much more complex. Particularly because at the Immigration and Integration Service, each case has to be assessed individually, it proves nigh impossible to ensure consistent decision-making across cases.

In the panel round on environmental law, Dr. Barbara Beijen (Radboud University) zoomed in on developments with regard to the many directives in the field concerned. In an earlier study, she found that various directives were poorly aligned with each other, that problem definitions are often ill-defined, that their scope was very extensive and often heavily reliant on soft law. According to dr. Beijen, improvements in recent years seem marginal. Dr. Josien Stoop (Dutch Ministry of Infrastructure and Water Management) elaborated on the member state-driven initiative of ‘Make it Work’. As some EU countries felt that there was too little room for them to give input with regard to environmental directives, they decided to take matters into their own hands. This led to structured meetings of lawyers, policy-makers and practitioners with the goal to improve the regulatory acquis in this field. Dr. Stoop indicated however that practitioners continue to find it difficult to implement and apply multiple directives at the same time.

Subsequently, Professor Pieter Kuypers (Radboud University) presented his assessment of BR in public procurement. One of the goals here has been to make the rules more accessible. Prof. Kuypers noticed, however, that the volume of legislation over the last decade has doubled and become increasingly detailed instead. He suggested a reversion to more simple wording, as well as an overall decrease in legislation, also to avoid gold plating. Karsten Klein (Committee on Improving Public Procurement, Ministry of Economic Affairs) opined in turn that many problems in public procurement stem from lack of awareness and communication. He suggested that explicit secondary aims need to be set for remedying these issues.

Finally, Dr. Stijn van Voorst (Leiden University) highlighted the findings of his research on ex-post legislative evaluation. He found that the Commission tends to concentrate on evaluating directives and complex legislation. It moreover appears that evaluations by external evaluators are of higher quality than internal evaluations. Overall, he concluded that the Commission has upped its game over the years and performs relatively well on this front. Dr. Adriaan Schout (Clingendael Institute) closed the session by raising a number of questions, such as to what extent the quality of Commission evaluations can be quantitatively assessed, and to what extent they are considered in and truly impact on the development of new policies. To see the impact of evaluations and, in particular, to understand the politicization of evaluations, we should examine how they are used in the subsequent policy proposals. He concluded that as researchers, we have only began to scratch the surface of the actual workings of EU BR policies. 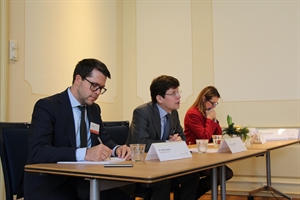 Overall, the seminar offered a unique opportunity for both academics and practitioners to exchange views on the EU’s Better Regulation programme, deepen their insights and cross various disciplinary boundaries in the process. The academic perspectives were nicely complemented by the views from practitioners struggling to meet the challenges in their day-to-day affairs. Despite the good intentions behind BR and results achieved so far, it became wholly apparent that there is still ample work to be done for scholars as well as those in the field. 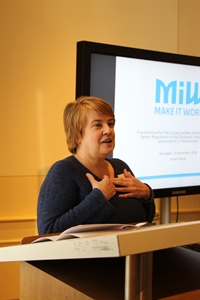