How can we achieve the targets of the Paris Climate agreement? Discussing policy options with the En-ROADS simulator

Reducing greenhouse gas emissions is one of the most urgent sustainability challenges societies are currently facing. But what does it actually mean to keep climate change in line with the target of 1.5 – 2 degrees of temperature increase as agreed in Paris in 2015? 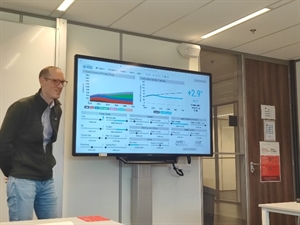 In March 2022, TransAct members tried to make sense of what it takes to meet these targets. Vincent de Gooyert guided the participants through policy options for climate action, and together we discussed the implications of policies and tried to develop a policy mix to mitigate climate change. The En-ROADS simulator, developed by Climate Interactive and MIT, indicated the effect of our proposed policies on temperature increase, but also suggests wider consequences (negative and positive) of policies.

Can we achieve the targets decided upon in Paris?

Yes! Will it be easy and straightforward? No! Even the most optimistic and idealistic participants started to become worried when the simulator showed that most of the proposed interventions contributed relatively little to the overall emission reduction. It was a tedious process to find a fitting policy mix. There is no single solution, we need a combination of very different types of policies. Even worse, policies counteracted each other. And the question arose how much we should rely on the energy market. The participants agreed that giving up and loosing hope is no option, though. Even if we only reduce emissions to 3°C, we can prevent tipping points that would accelerate global warming even more.

“There is no single solution, we need a combination of very different types of policies.”

Is nuclear energy the panacea?

Surprisingly, nuclear is not having that much of an impact on the reduction of temperature increase. The main problem is that subsidizing nuclear energy will only have an effect in 12 years due to construction times, however, we need to reduce greenhouse gas emissions in the next 10 years. Moreover, subsidizing nuclear also means less renewables as it competes with solar and wind energy.

Should we control population growth?

Also the effects of reducing fertility rates is rather limited because the impacts are only realized in the far future. Additionally, it also depends on societies way of life and the energy intensity (the amount of energy used to produce a given level of output or activity). If this is zero, it does not matter whether there is a population of 11 billion or 9 billion.

But electric cars are the solution?

Electrification of transportation was a big issue during the COP 2021. Indeed, the simulator showed that replacing the current fleet of cars with electric ones does indeed reduce temperature increase somewhat. However, it depends of course where the energy comes from. Electrification with the existing energy mix is less effective. Additionally, the resources needed for batteries (e.g., cobalt and lithium) are often coming from the Global South and their mining causes negative social and environmental consequences. So the question emerges if it is morally right to let other parts of the world suffer for our energy transition? The participants agreed that it is important to consider the global consequences of certain policies.

So, what are effective policies?

The good news is, there are a few policies that seem to be more effective according to the En-ROADS simulator. Introducing carbon taxes are a rather efficient measures, because it changes the fuel mix and reduces energy demand. However, carbon taxes should of course be organized in a way that they don’t burden the most vulnerable members of our societies. An issue that becomes increasingly important given the increasing energy prices.

“It is always said that changing our lifestyles and consumption patterns is impossible or at least very difficult. But looking back 100 years, people’s life was also completely different.”

Our main conclusion was that we need a combination of many policies with a focus on keeping as much oil, coal, and gas under the ground. Most of the policies take a very long time to have substantial results because of the long lifetime of fossil fuel capital. Hence, the sooner we are able to implement effective policies that keep fossils under the ground, the better.