How to achieve just, fair and inclusive climate adaptation? – Insights from a TransAct-panel organized at the SRI Conference 2022

Societies need to transform and adapt to the impacts of climate change (e.g., drought, heat stress, landslide, flooding). However, not every response to climate change is a good one. Climate change is deeply related to issues of injustice (see box 1). Adaptation actions can even increase existing injustices (Anguelovski et al. 2016; Byskov and Hyams, 2022). How can we achieve just, fair and inclusive climate adaptation that ‘leaves no one behind’?

During the international SRI (Sustainability Research and Innovation) conference 2022, TransAct organized an online panel on Climate Adaptation and Justice to discuss this question, moderated by Juliette Alenda-Demoutiez and together with our speakers Omaira Bolanos Cardenas from Gender Justice and Latin America Program, Paula Moreira from Hivos´ Global Alliance on Just Climate Action in Brazil, Amos Ochieng from Makerere University in Uganda, Hotmauli 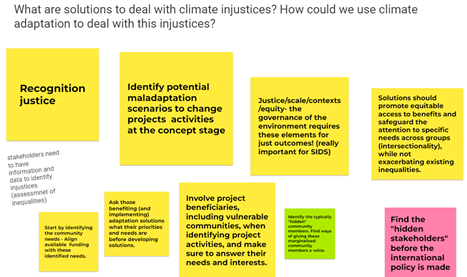 “Oely” Sidabalok from Soegijapranata Catholic University in Indonesia, Esther Wahabu from the International Water Management Institute in Ghana (now a PhD-Candidate at Radboud University), Maria Kaufmann from Radboud University in the Netherlands, and around 30 participants from research, governments, and civil society that shared their input via a jamboard.

The importance of data on vulnerability

The cases demonstrated the importance of having data on vulnerabilities and their distribution and being able to analyze this data. This is seen as the basis for ensuring justice, especially if actors are not able to indicate groups’ vulnerabilities, it is difficult to consider these vulnerabilities in adaptation projects. Yet, having aggregated data on the distribution of vulnerabilities and a participatory-developed metric to assess vulnerability is often lacking, in developed as well as developing countries. If this data is available, they can also be used in Green Budgeting approaches, for example, where the consequences of adaptation actions on equality of different groups can be assessed ex ante and ideally avoided.

The speakers stressed the importance of engagement of local communities and their empowerment to achieve a more just approach to climate adaptation. The case studies stress the need to build on communities’ local knowledge and gear adaptation actions towards the communities’ capacities, needs and traditional relationships with their (natural), cultural and spiritual surroundings. In the Ghanian case study this is done through participatory action research including organizing  dialogues and learning events and distributing  communication material; in Vienna a contest where citizens can submit their adaptation projects; in Glasgow CSOs are consulted to provide feedback on adaptation plans to avoid maladaptation; the case study of Monte Serrat (Brazil) confirms this approach and emphasizes the need to pay attention to language (I.e., using inclusive and non-sexist language to ensure women´s participation).

The need for demarcating in law and practice the rights of local peoples, women and marginalized groups of their customary territories has been identified as an important basis by the speakers and the audience. Funding should consequently be geared towards these vulnerable communities, which have been historically excluded from decision-making, design and implementation of adaptation actions.

The speakers emphasized the need for finding synergies considering adaptation projects in their broader societal and economic context. The case study of Lake Mburo National Park in Uganda shows how climate adaptation and tourism can be combined. Combining the two makes it possible to monetarize the benefits and share them with the community for through distributing 20% tourism revenue (entrance fees) to local communities for adaptation actions. The case study of Tambak Lorok showed how the adaptation project was also used to provide communal toilets, increase community food supply, improve waste management, provide health easily accessible health service for women. It is also about combining informal and formal initiatives, acknowledging informal adaptation processes and including them in the formal adaptation policies or programs.

A problem with identifying and implementing synergies in practice is that competencies are distributed across various levels and actors, so that the aware and engaged actors often do not have the competences to create the synergies.