After the great Flood in 1953 a set of safety standards was established for the Dutch flood defenses. These standards have been revised on the basis of new insights as of 1 January 2017. In the All Risk program, Dr Sander Meijerink with PhD student Emma Avoyan is studying how these standards can be realized in practice.

“The old safety standards were devised to meet the so-called exceedance risk, the risk that the water rises higher than the crown of the dyke,” says Meijerink, Associate Professor of Water Governance. "Water engineers today are much better equipped to calculate the actual failure probability of dykes. A dyke may breach as a consequence of water pressure, for example, even if the water has not yet risen above the dyke.” 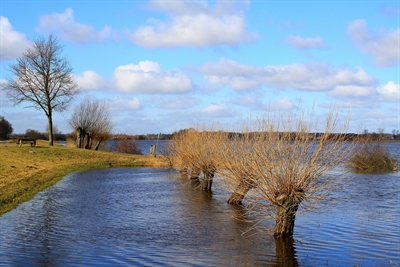 Another important reason for the introduction of new standards is that the level of damage potentially caused by flooding has risen. Meijerink: “The population has grown enormously since the former standards were established and plenty of capital has been invested in the Netherlands in the last 50 years. Finally, climate change is causing higher levels of peak overflow discharge in our rivers and raising sea levels.”

The realization of the new safety standards is taking place in the Flood Protection Program in which the Dutch government and water boards are working together. It is already clear that changes will have to be made at a great number of sites. “It is an enormous task,” says Meijerink. The greatest challenge for the water sector is to develop the new water safety standards in tandem with other spatial developments.

The Dutch water sector has a very powerful organization with a large pool of knowledge. Meijerink: “That doesn’t mean water engineers automatically take other spatial planning developments into account. On the other hand, spatial planning is also not automatically taking flood safety into account.” The PhD project of Emma Avoyan is focusing primarily on the question of how to create a more effective interaction between the two.

Everyone wants to avoid a flood, but there is much discussion about how to achieve the necessary prevention measures. “Take the Ravenstein-Lith section for example, along the Maas river,” says Meijerink. “The question there is how to combine dyke fortification with the space required for river-related measures. To achieve this the flood protection people need to talk to the landscape engineers. In addition, naturally agreements need to be made over the financing.” This requires a lot of deliberation and consultation. In the end the same method is applied as has been used for centuries in the Netherlands: the polder model.