Usually when international negotiations about agriculture, trade and industry treaties are studied, the focus is primarily on economic interests. But the ideas behind policy objectives, values and standards are just as important in explaining the success or failure of a trade deal. Dr Gerry Alons hopes to increase the understanding of the developments in transatlantic trade relations such as TTIP, by studying both the economic interests and cultural norms.

The research project Ideas and Legitimating Transatlantic Trade Relations, carried out by Gerry Alons, studies the relationships between the USA and the EU. Economic gains are a shared goal in international negotiations, but the underlying ideas regarding differing policy objectives and the correct instruments for achieving these objectives may vary. Alons: “Take, for example, genetically manipulated organisms (GMO). In Europe these are viewed as dangerous. That viewpoint carries more weight than any economic gain that could be achieved through them. In the USA GMOs are seen as the solution to the world food security issues. The opinions of NGOs such as Greenpeace are included in considerations, but the ideas behind the opinions (e.g., Why are people opposed to it?) are not treated explicitly in the research. Alons: ‘They’re against it and that’s that.’ My research aims to look at how great the differences actually are, and whether the various parties are trying to achieve the same end by different means.” 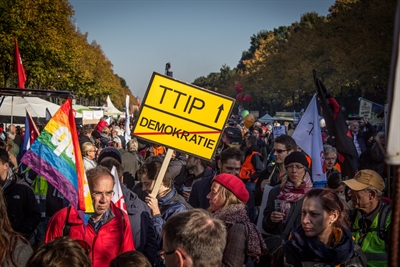 International negotiations are very topical. The debate raging around the transatlantic accord TTIP has outspoken protagonists and critics. Alons: “TTIP negotiations are being held in secret. That’s logical, because you don’t want to let your opponent know what your intentions are. The information provided by the media is incredibly slanted. The proponents only see sunshine and toss around figures that have yet to be substantiated. The critics are claiming that we would be sacrificing our wealth and standards if we give in, but that too is lacking in nuance. It’s the researcher’s job to provide people with solid information and an honest picture of affairs.”

Race to the bottom

Negotiations can lead to mutual acceptance of each other’s environmental standards for example. One possible drawback of such a development is that it could result in a race to the bottom when the standards in one of two countries are clearly lower. Products that meet the lower standards are then allowed to be sold in both the USA and the EU. So it is by no means unwarranted that civilians are concerned about the consequences of trade treaties. Alons: “Ideally you strive to create harmonization, a middle road that is acceptable for both parties and their people. I am trying to make a contribution to improved insights and better estimates of the outcomes of transatlantic negotiations.”