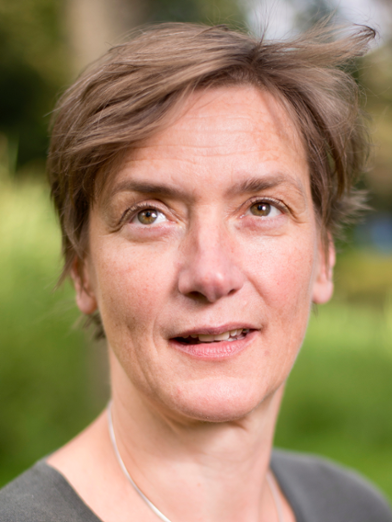 Yvonne Delhey's research focuses on two aspects within the broader context of German literature and culture: Autobiographical/autofictional writing and related types of texts, in which the relation between individual and society is explored. A topical example is her research about a ‘documentary narrative’ on the concentration camp Ravensbrück by Christa Wagner, which was published in 1987 in the GDR and can be seen in line with ‘secondary witnessing’: Wie
bezeugt man totalitäre Gewalt? (2018). Continuing her work in this field, she co-organised recently a conference on Autofiction and Utopia. On a separate track out of that field evolved a new focus, persiflages on Hitler, which at first sight might seem completely far-fetched, but has its origins in books like the exceptionally popular novel Er ist wieder da (2012) by Timur Vermes, where Hitler as I-narrator dominates the story.

The second focus is on conceptualization of space in literature: How is space perceived and how is it narrated? This not only concerns the representation of landscape or the physical perception of space but also spatial concepts about our social behaviour and movement in space. More recently her research concentrates on islands and the meaning they have in our thinking and doing. In their literal and figurative isolation, islands seem the ideal experimental site for diverse social issues.

Her teaching expertise in the field of German as a Foreign Language and intercultural learning has been proven in various projects, also on an international European context, e.g.: Ein Erasmus-Intensivprogramm als Möglichkeit internationaler Kooperation im Bereich Deutsch als Fremdsprache (2014).

She is member of the research group Studying Cultural Infrastructure and Reception Across Borders (SCARAB) at the Faculty of Arts in Nijmegen, the Dutch national research netwerk Onderzoekschool Literatuurwetenschap (OSL) and the International Auto/Biography Association (IABA) Europe.