The St Irenaeus Orthodox Theological Institute (St Irenaeus for short) is based at Radboud University. The academic staff are appointed at the Faculty of Philosophy, Theology and Religious Studies and are members of the Department of Textual, Historical and Systematic Studies of Judaism and Christianity. They teach and conduct research on Eastern Orthodox and Oriental Orthodox Christianity.

The staff of St Irenaeus teach eight courses at Bachelor level within the Pre-Master Orthodox Christianity. Upon completion of this Pre-Master, students can advance to the Master's in Spiritual Care.

More information about this pre-master programme will follow soon.

Bachelor students from other programmes or universities who wish to take courses from the Orthodox Christianity Pre-Master are very welcome: we offer a minor of 15 EC and a minor of 30 EC. Registration opens mid-July. 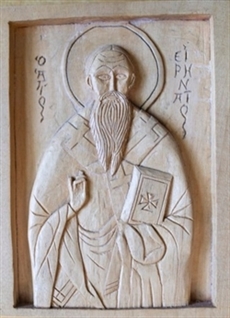 What is Orthodox Christianity?

Orthodox Christianity is one of the three major denominations within Christianity (alongside Roman Catholic and Protestant), with churches based in Central, Southern and Eastern Europe as well as churches rooted in the Middle East and Africa. Some of these churches already have a long tradition in the Netherlands (think of Queen Anna Pavlovna Romanova (1795-1865), others were founded relatively recently by migrant workers and refugees who came to the Netherlands in the second half of the twentieth century.

Orthodox is often capitalized in this context to distinguish it from the adjective 'orthodox', which is mainly used to denote the more conservative groups within religious traditions such as Judaism, Christianity and Islam. Orthodox (capitalized) Christians value their faith traditions highly, but do not necessarily consider themselves conservative, let alone fundamentalist. Mysticism and rituals occupy an important place. It is now estimated that there are nearly a quarter of a inhabitants in the Netherlands million with an Orthodox background.

The broad Orthodox tradition is often divided into two families: the Eastern Orthodox and the Oriental Orthodox, in the terminology of the Word Council of Churches.

The Eastern Orthodox family consists of several autocephalous (self-governing) churches: the four ancient Patriarchates of the early church, Constantinople, Alexandria, Antioch and Jerusalem, the four Patriarchates of more recent origin, Russia, Serbia, Romania, and Bulgaria, the Catholicosate of Georgia, and the churches of Cyprus, Greece, Poland, Albania, and the Czech Lands and Slovakia. It also includes the autonomous Orthodox churches of Finland and Estonia. The Eastern Orthodox “diaspora” consists of churches in the Americas, Asia, Australia, Western Europe and sub-Saharan Africa. The monastery of Sinai is an autonomous monastic community related to the Patriarchate of Jerusalem, and Mount Athos and the semi-autonomous Church of Crete remain under the jurisdiction of the Patriarchate of Constantinople.

The Oriental Orthodox family is comprised of the Ethiopian, Coptic, Armenian, Syrian, Indian and Eritrean Churches. They have been referred to by outsiders as non- or anti- or pre-Chalcedonian, Monophysite, Ancient Oriental or Lesser Eastern, names they do not accept themselves. Presently the generally accepted name is Oriental Orthodox. The Oriental Orthodox churches are ancient churches which were founded in apostolic times, by apostles or by the apostles’ earliest disciples.The majority of the members of these churches live in Ethiopia, Egypt, Eritrea, Armenia, India, Syria and Lebanon. There are also large diaspora communities in parts of the Middle East, Europe, Asia, North and South America, and Australia.