The house I live in was a ruin 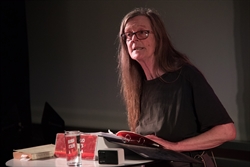 “There’s nothing a hermit likes doing more than talk.” Sara Maitland, writer of fiction and non-fiction and ‘part-time hermit’, clearly knows herself well. Her lively, humorous and talkative personality has no connection whatsoever to the stereotypical idea one might have of a hermit. She continues by painting us a picture of her life: “I live in the South West corner of Scotland, one of the least populated areas of Europe. At the same time, it is also only 15 miles of where I grew up – so by moving here I came home and went to a completely different place at the same time. The house I live in was a ruin when I bought it. I was proud of rebuilding it, and I became even prouder when I heard my brother took a bet that I wouldn’t complete it.”

What a weird thing to do

These first few minutes of Maitland’s lecture represent how the evening will be: a mixture of philosophy and personal stories, of jokes and serious questioning. “I am mainly interested in why it is perceived a weird thing to do: to go and seek solitude. The question is, how have we arrived in a world that promotes people to be autonomous, self-fulfilled and individualistic – but that those same individuals cannot cope with being alone. It seems we are supposed to be autonomous individuals annoying other autonomous individuals.” 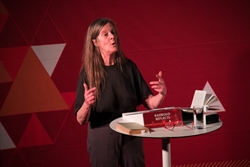 “In time, there has always been a fluctuation of the needs of the individual and the community, and the degree of solitude marks that development. The Romans valued public duties enormously. You were educated in law, rhetoric and morals. Or, as one author put it: the plebs might listen to politics, but the aristocrats only listen to jokes. Baths were public because you weren’t only supposed to BE clean, but you had to be KNOWN to be clean. The Romans were deeply committed to producing social human beings. Into that highly socialized society came a new religion that said the complete opposite: not the state, not your community were most important, but your personal relationship with God. The problem with Christians is that they don’t seem to care about public order. This lead to a clash of cultures, two cultures that banged into each other – leading to a lot of tension. And before Romans and Christians could reach a compromise, Rome fell.”

Maitland pauses and then adds, grinning: “Waves of migrants lead to the dark ages… A strange vacuum appeared in which the only stability was the people destabilizing the system. Much later, the Church emerged as the rational and logical new power. Within this new Christian worldview, solitariness became holiness. That went well for quite a long time but ended in the anti-solitary movement of people hating hermits and trying to get back to a social culture and civic fulfillment.”

It’s a dense but highly interesting summary on the history of solitude Maitland is giving us: “Then we had a time of romanticism in which solitude became very attractive again: it was all about how the world oppressed the natural genius, and how you had to get society out of your head. The idea of the pure me getting contaminated by the you got extremely popular.”

She pauses shortly: “Nowadays, we are completely divided between the two extremes. We want to be permanently connected to others and at the same time be individual and autonomous. That’s deeply problematic, as we overinvest in interpersonal relationships while at the same time underinvest in teaching children to how to use solitude. Weird, too, because everybody knows solitude and silence are good for you. Of course, it can also drive you psychotically mad – but so can anything else. Our perception is that children are put endlessly at risk by being alone, but the number of children being killed by strangers has been the same since 1953. We are more likely than ever to be alone: there are more single parent households than ever, people generally don’t marry young, there is a prolonged widowhood because we live longer etc. So chances are fairly high that somewhere in the course of your life, you will be alone for some time. Despite these facts, we still simply do not know how to use it. We don’t have the confidence of the Romans to bluntly state “Well, that’s what you have to do, being social” and yet we can’t approve of being alone either. My mother, for example, found it impossible to imagine that someone could enjoy being alone – not make tea for someone each day must surely mean you are very egocentric. We have reached a cultural hiatus, we live in a society with impossible ends: we want everyone to be authentic and yet we are afraid of being alone. Still, we know it is good for us, silence and solitude, in several ways: 1. A deeper conscious of oneself; 2. Attunement to nature; 3. Enjoying what you perceive; 4. A deeper relationship with the transcendent; 5. An increase in creativity and 6. An increase in happiness. But, unfortunately, experiences of solitude are under-recorded.”

Being that as it may, Sara Maitland is happy to share her own experiences with us, which show a great overlap: 1. Intensification of physical and psychological experience; 2. Relaxation from social pressure; 3. A sense of givenness, or the feeling that you are part of everything – I know nobody who reaches that state without solitude; 4. Auditory hallucination – being alone for a longer time induces a sort of hyperhearing; 5. Boundary confusion, for example the line between time and place, self and other; 6. The exhilarating consciousness of being at risk, as in childhood; 7. Ineffability: the term for a feeling that something cannot be expressed in words - a depth, a meaning that cannot be expressed in language; 8. Bliss.” 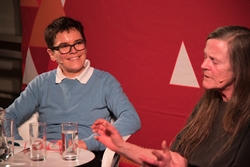 Her last statement is, again, food for thought: “While we spent a lot of time teaching our children to be sociable, we don’t spend a minute using solitude as a treat. When we are angry, we send our children to their bedrooms as a punishment. No one ever says: “You have been so sweet and well-behave all day, you can now go to your bedroom and be alone for some time.”