"It would be great to invite more African Scholars in the future!" (uit een deelnemersevaluatie)

On a stormy night in Nijmegen, Senegalese economist, writer and singer Felwine Sarr discussed the future of Africa with a diverse but dominantly Dutch audience. In many ways, the objective of this talk was not to inform, but instead to trigger new ways of thinking about knowledge and development. Particularly, to get away from a linear way of thinking that originates in the West and to allow for thought about the future in which pluralities of knowledge can exist alongside each other. We need to get rid of the myth of progress and singular forms of knowledge in order to open up space for Africa to rethink itself and its future. 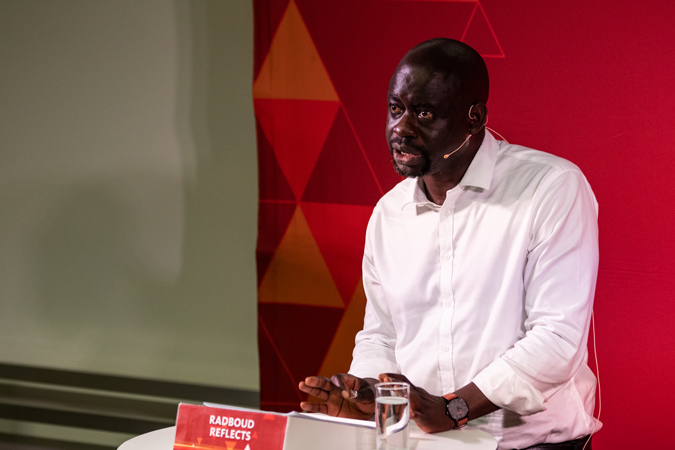 African countries have been placed in the big western narrative of developing states. It is already with this simple, and at first glance little surprising remark, that Sarr provokes his audience to think critically. What does it mean to apply and even internalize concepts such as development and growth? The argument throughout the talk is crystallized in the formula that African societies have to think for themselves in order to create their own future. This means to think critically about the idea that the new is always better and that going back to tradition would mean going backward. Instead, Sarr argued, Africans societies have to explore their rich tradition in order to reinvent themselves. Thus, not trying to catch up with Western societies but instead reinventing their own
“metaphor of the future.”

The narrative of Africa as “the dark continent” and the clichés and stereotypes that accompany this narrative originates in the colonizing period. The colonizers needed to construct this picture in order to justify and stay united in their mission. From then till now, Sarr argues, this picture has not really evolved; the imaginaries are still here. The dystopian idea of Africa is reinforced time and again, for example by the current president of the United States who spoke about “shithole countries.” A strange mixture of pity, fear and the smell of opportunity draw the world powers to Africa. Africa has an abundance of resources, space, enormous population growth and the biggest percentage of youth; it has the potentiality to be a living laboratory. The question is, what type of equilibrium will African countries promote and who will benefit from the experiments? 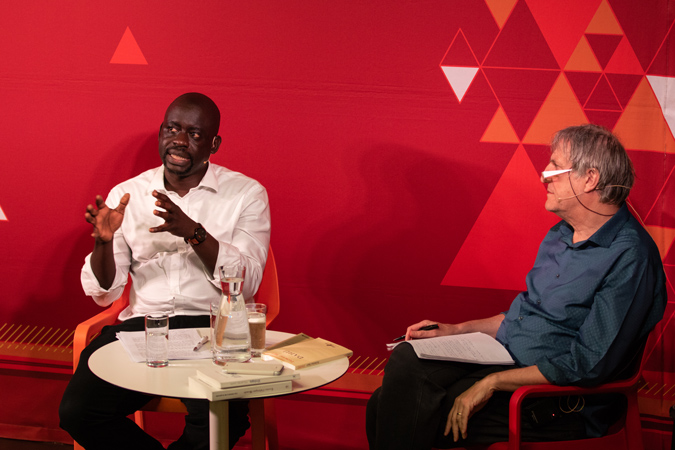 What Sarr calls the “colonial library” contains ideas of cultural superiority and racial prejudice and it is characterized by a scientific way of thinking. It holds a linear idea of progress and an atomic perception of reality. This apparently universal archive continues to influence the perception of African societies up until this day. Constituting this library has been “necessary” for the colonizers in order to gain absolute political control in Africa, as the sense of superiority that came with it proved to be vital for the dominators’ hearts, minds and mission.

It is important to recognize that the injustice linked to this library has different faces, one of which can be called epistemic injustice. Epistemic injustice starts with concepts and categories that change the way people see themselves and are seen by others. A cultural framework has been interiorized and persists today. In order to recover sovereignty then, it is necessary to liberate this discourse. This means for African societies to create their own scientific, historical and cultural discourse, their own norms and criteria’s. Rather than further incorporating Western discourse, African societies need to express their own material life, social-political context, and archeological environment. A decolonization of mind and imaginaries will then open up new universes to be explored.

In order to get here, we must acknowledge a plurality of ways of knowing and thinking. This starts with the idea of equality: the recognition that African traditional forms of thought are equally valuable. Changing the way we gain knowledge comes down to reconsidering the social sciences. Sarr makes an important distinction between natural and social sciences. Whereas natural sciences are universal, social sciences are inherently context bound. Social sciences as practiced in the West, such as sociology and economy, are more or less directly applied to African cultures. Anthropologists and economist explain dynamics, facts and figures according to their own Western ideas without fully understanding that because these ideas are created in a Western context they are not immediately compatible with the complexity of African dynamics. 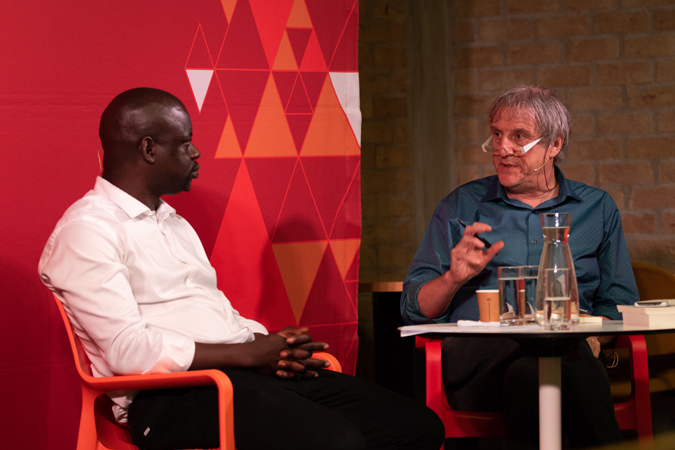 Of course, Sarr adds, we share many similarities. We all live and die; we share losses and share planet earth. We live in a globalized world, but that does not mean that social sciences are instantly applicable on a global scale. For example economy is a social science; it depends on resources, geographical and cultural factors, and so on. Hence, there is a different way of perceiving economics in Africa. Different from the Western rationality of optimizing decisions, minimizing costs and maximizing profit. In Africa, a good conversation with your buyer might mean that you will sell your product for less, just because you got something else in return from that buyer as well. From the Western point of view, this is quickly framed as corruption, blocking any understanding of this relational view on economics as something that can work in itself. The economist in Sarr surfaces when he addresses facts and figures from the World Bank, such as lists of corrupt countries, many of which are in Africa. Arguably, the global system is equally harmful for some countries as their corrupt governments. International relations are not fair, but this is not being reflected in such statistics. Instead, they function to reinforce the social imaginary about Africa as a backward country.

What is necessary now, in order to transcend this so-called colonial library, is an epistemic shift. This means to open up alternative ways of knowing and thinking to those we know from the West. Rather than providing us with examples to prove–another Western imperative–the wealth of ideas that can be found in African history, Sarr asks us to think for ourselves. Would Africans really have survived so long without developing any valuable ideas by itself?

So, a new view on reality, what would that entail? Sarr recalls the Western way of cutting reality in little portions to be glued together afterward, the way of sharply distinguishing between object and subject and prioritizing the autonomous subject. This epistemological tradition has proved to be less fruitful when dealing with the humanities. Objects are multilayered and not strictly separable from the observer. What is needed is a bifocal point of view that understands, in this case, African society, from the inside. To achieve this new mode of understanding reality, Africa needs a departure from the scientific way of thinking, to review its own history and culture and think about solutions for the challenges that it faces in the field of education, environment, and democracy. Not by isolating itself from the rest of the world, but by finding its own strengths. Not by going back into traditional ways, but by re-evaluating tradition in order to think about the future.

This report was written by Gaia Klabbers, as part of the Research Master Philosophy of the Radboud University.