Anouncement - Why is money so important to us? Unexpectedly, the American scholar of religion Devin Singh points to Christianity for an explanation. From the start, he claims, Christian thinkers have connected ideas about God to economic concepts. In doing so, money gained an important, because godly, status. Come learn how knowing about the origins of our present economy can contribute to formulating an alternative to capitalism. See the full anouncement below.

There is a tendency to speak of economy and finance in religious terms. We say, for instance, that some people worship money. Dr. Devin Singh, scholar of religion in Dartmouth College, USA, argues that this is no coincidence. In his new book, Divine Currency – The Theological Power of Money in the West, he explores the structural connections between Christianity and economy. He has a practical reason for this: if we understand the presuppositions that govern our views on economy, then this might help us to formulate alternative economic systems. On December 4th 2018, Sing came to the Lux to explain his ideas. After a very clear lecture, he specified some of his points in an interview with the program manager of Radboud Reflects, Liesbeth Jansen.

Singh started his lecture by signaling some connections between religion and economy. He began by noting that although the Christian church has a long history of critiquing the love for money, capitalism first emerged in Christian countries. Moreover, it was in these countries that mortgages were invented, even though Christianity heavily spoke out against lending money. Another connection are statements by financial figures, such as by Lloyd Blankfein, CEO of Goldman Sachs, who said that his corporation is “doing God’s work”. Somehow, economy often associates itself with religion. 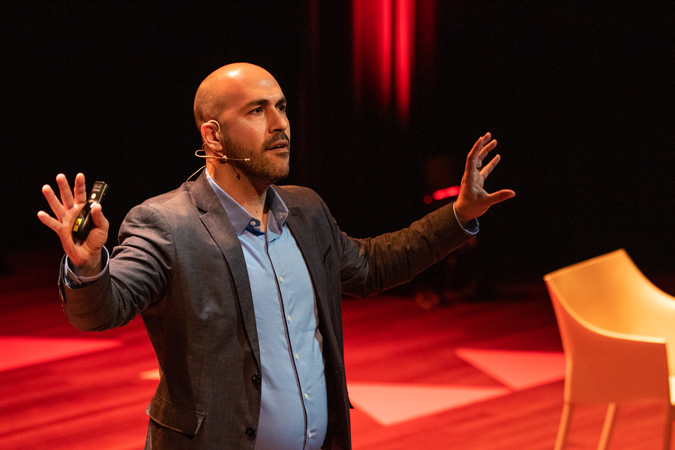 Rather than regarding these associations as trivial, Singh suspected there is a structural intertwinement of economy and religion. To show this he began studying texts and objects of the Patristic period of Christianity. During this time, influential Church Fathers developed many of the aspects of Christianity that we know today. Singh argued that in three ways this period established the connection between God and money.

Singh started with Eusebius of Caesarea who introduced the concept of God as a divine economist. For Eusebius, God was a financial manager distributing resources throughout His kingdom. Eusebius gave this theological notion a political value by applying it to Constantine, the first Christian emperor. Eusebius saw God mirrored in the actions of Constantine, which then made it plausible to also regard him as an economist. He had to allocate the right resources to the right people. Following the New Testament, the right people were the poor. From then on, a moral leader had to take care of the poor.

The second example is about Tertullian arguing that humans are God’s coins. This idea came from the historic association between coins and images. In the Roman period, people thought that the emperor was present wherever his image was seen. During coin exchanges, the emperor was present in the image on the coin to ensure the validity of the transaction. Tertullian thought that, in the same way, humans were coins stamped with God’s image. God was present in humans, even if He was not literally there. Jesus was, in turn, the ideal coin. 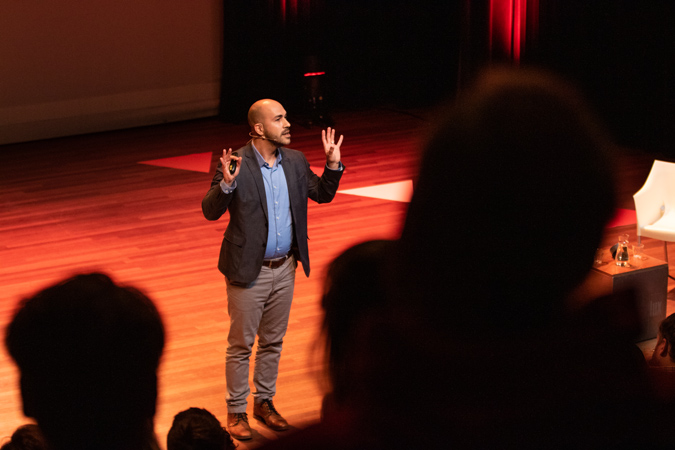 The ideas of God as an economist and Jesus as an ideal coin, thirdly, cleared the path for an economic theory of salvation. Gregory of Nyssa thought that Adam and Eve had done a transaction with the devil to receive the knowledge of good and evil. This created a debt by humans to the devil. God the economist decided to free humanity of this loan through the ideal coin of Jesus. Thus, Jesus was God’s way to pay off the debt to Satan.

The Patristic period connecting money and debt to a transcendent God influenced subsequent history, Singh argued. Economist Adam Smith, for instance, had an almost religious believe in the powers of an invisible hand leading economic markets to an equilibrium. This unobservable power regulated economy, much like God managing the world. Another example can be found in colonialism. The missionary movement and colonialism went hand in hand. Sending the message of Christ, Singh stated, usually also implied extracting resources. After the analysis of the Patristic period this seems hardly surprising: there is an economic logic to religion.

Coming to the end of his lecture, Singh argued for the practical significance of doing such historical analyses. Firstly, it makes us aware of the history that has shaped our worldview. It shows us that the principles that we uphold today are not universal but handed down to us after centuries of development. Becoming aware of these developments can, secondly, have a “disruptive” power. We are so immersed in certain notions of economy that it is difficult to think without them. Rigorously analyzing these notions might change our conception of economy and open us up to alternatives. The specific nature of these alternatives, Singh did not know yet. He wondered if the audience had any ideas. 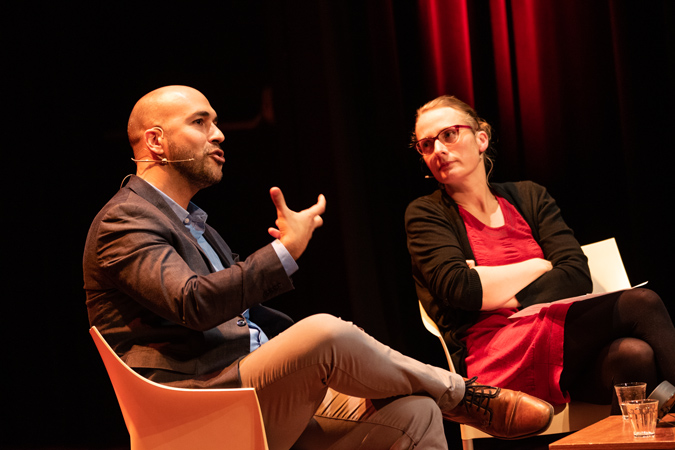 Both the interviewer and the audience, however, cast the question back, forcing Singh to give a little insight in his political views. He emphasized that no quick moves, such as a revolution, must be undertaken. We must first liberate ourselves from certain problematic notions of economy. We must stop, for instance, to connect salvation to being freed from a debt. Another option would be to establish care as an economic ethic, rather than sustaining an economy of debt. Singh, however, ceded that he did not know what this would entail exactly.

In conclusion, in the Patristic period of Christianity strong connections have been established between religion and economy. God was understood as an economist, where humans were the coins in His image. Jesus was, in turn, the ideal coin with which God bought out the debt humans had to the devil. These connections between economy and God had an influence on our perception of finances. For instance, economic concepts tend to be deified, as Singh showed in the case of Adam Smith. Uncovering these connections might make us aware of the ways we usually understand economy and lead us to alternatives to our modern economic climate. What these alternatives are, however, we are still to find out.

This report was written by Niels van Henten, as part of the Research Master Philosophy of the Radboud University.

Why is money so important to us? Unexpectedly, the American scholar of religion Devin Singh points to Christianity for an explanation. From the start, he claims, Christian thinkers have connected ideas about God to economic concepts. In doing so, money gained an important, because godly, status. Come learn how knowing about the origins of our present economy can contribute to formulating an alternative to capitalism.

The birth of capitalism

The common idea is that capitalism was able to flourish because people in the West were no longer “kept under control” by religious norms. But is that true?

No, argues Devin Singh. Religion and money have been linked from the beginning. Early Christian thinkers described God with metaphors like “cosmic administrator” and “heavenly economist,” while Jesus was depicted as a “payment that buys us free from sin.” This association between money and God gave money a sacred aura and increased its power and authority. With the rise of Christian political influence, money got more important too. And from this capitalism was born.

How to move forward? Is there a way out of capitalism? According to Devin Singh, it all starts with knowledge about the past. When we come to understand what our greed is based on, this knowledge enables us to critically analyze present day rhetoric, practices, and assumptions. For example, argues Singh, it will open our eyes to the fact that neoliberal rhetoric makes use of a subtle and secular version of the Christian salvation narrative: “If only these countries would become better capitalists, all their problems would be solved.” The perspective that Singh offers us, helps us to scrutinize these types of hidden assumptions – and look for alternatives.

Devin Singh is a scholar of religion at Dartmouth College (US). In his work, he explores questions of religion and politics, religion and economics, secularization, and race & colonialism in relation to religion. This year he published his first book Divine Currency – The Theological Power of Money in the West.