Recently the number of calls to action to decolonize universities has increased. The debate surrounding these calls has started to include topics of knowledge, power, and diversity in race and class. However, many questions remain unanswered: what does a decolonization movement entail? What does decolonized education look like? What would the demands of such a movement be? And how would the movement reach this goal?  Philosopher Josias Tembo introduced the topic. He himself has been part of the movement in South Africa and is now doing PhD research on race and religion at Radboud University. Afterwards social geographer Kolar Aparna joined him in a debate and together they engaged with the audience. Program manager Lisa Doeland chaired the discussion.

Lisa Doeland introduced the topic, providing us some insight into how the title of the lecture was received. Apparently, the hashtag ‘AquinoMustFall’ was considered a point of contention and thus launched many directly into the debate. The hashtag was chosen as a reference to the hashtag ‘RhodesMustFall’, that sparked the debate in South Africa, and also as a pun on the recent teardown of the building named after Aquinas and its replacement, the Maria Montessori building. Montessori was an Italian philosopher of education and pedagogy, which are topics central to the debate on decolonization. 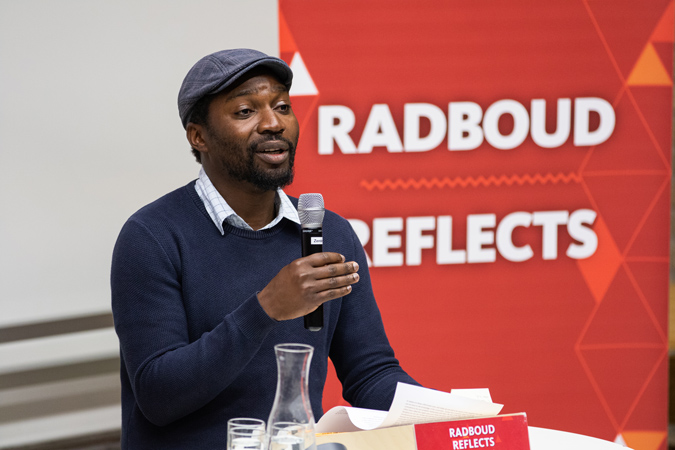 Start of a movement

Josias Tembo first discussed his thoughts on knowledge production in relation to the university and colonialism, because he argues that this was the context that sparked the discussion we were about to engage with. Tembo argued that colonization disrupted and still disrupts knowledge production and human spaces, which happens not only in colonized countries, but also in the colonizers’ countries. The relevance here is that certain power structures pervade both colonizer and colonized. Josias continued to shed light on what he deems to be the biggest issue of colonized education and thus of a colonized university: the perceived universality of the knowledge created. The knowledge produced is viewed to be indifferent to difference and anything that does not feed into this view is rendered outside truth, knowledge, and history. Certain individuals, their views, and their experiences are not considered heirs to the ‘universal’ knowledge and thus excluded. Josias represented this in a Descartes quote, that was altered: “I think, therefore you are not”. This exclusion has legitimized the colonial enterprise and is the reason why not only the South African universities need to decolonize. European universities need to investigate the workings of “colonial logic” as  well and should allow Europeans to engage with thought from other regions. 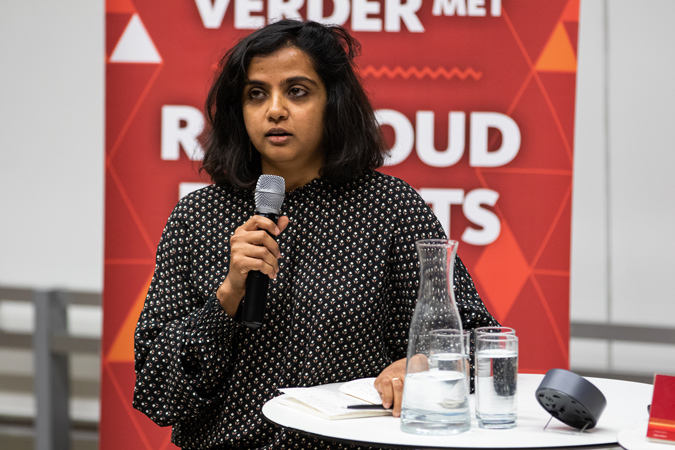 Kolar Aparna agrees with Josias on the interdependence of knowledge, colonial powers, and exclusion of the other and argued that many excluding notions still operate today, like Dutch students fighting for the rights of refugees in a language that the persons implicated don’t understand. The knowledge created at such a meetings reflects the knowledge created at our universities: knowledge separated from the rest of the world.

The subsequent debate was heated. One of the attendees explained why he sincerely disagreed with the speakers and argued that knowledge created at universities certainly is universal, invoking universal principles mentioned in Kant, Descartes and in the natural sciences such as mathematics. The response was that not all individuals are mapped, or at least feel mapped, by the knowledge that is created, even within the natural sciences. The knowledge created comes from a certain context, from a position. The ideal of universality has caused individuals who are not included in the scientists’ domain a lot of pain. The regime of truth includes some and excludes others. 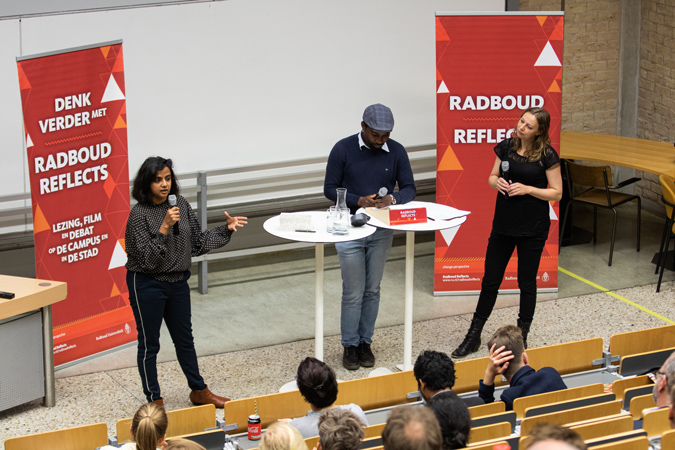 Other attendees were supportive of this response and argued that we should think of what the knowledge we produce does, specifically who it profits and who it can exploit. The last question was personal and came from a fellow graduate from Josias’ university: “How are you mediating your role of African scholar and European PhD? Has your role as decolonizer been strengthened while being here?” Josias response was equally personal, stating that his ideas on decolonization are contested. He reasons that this happens, because it is linked to power and the normal, making people unprepared to ask questions about decolonization. At the same time he is faced with colonization everywhere he goes: he speaks English and reads European thinkers.

This report was written by Max Stolk, as part of the Research Master Philosophy of the Radboud University.

Do you want to stay up to date about our activities? Please sign up for the English newsletter.

In March 2015 a group of students of University of Cape Town demanded the removal of Cecil Rhodes’ statue of their university campus. Why was this symbol of imperialist, racist business still standing there? #RhodesMustFall became their battle cry. What would decolonization of Radboud University look like? Do we need an #AquinasMustFall-movement? And what would their demands be?

The decolonization debate has moved beyond mere matters of curriculum (like including non-white thinkers and making room for postcolonial thought) and has come to question the relationship between power, knowledge and pedagogy. Furthermore, it by now includes matters of diversity aside from matters of race and class. Decolonization is, then, not only about changing the curriculum, but also about reflecting on what serves as worthwhile knowledge and about questioning the underlying assumptions and values. What are universities for?

After a short lecture philosopher Josias Tembo will discuss matters further with social geographer Kolar Aparna. They will discuss the workings of colonial logic and how this still applies to the University and they will also discuss forms of decolonization already taking place. Philosopher and program manager Lisa Doeland will chair the discussion.

Kolar Aparna is PhD researcher at the Human Geography Department. She researches hostility and hospitality in the context of migration and the politics of knowledge production on the refugee question.

This lecture was scheduled during the Radboud Racism Awareness Week, for details of all events: www.racismawarenessweek.nl

Do you want to stay up to date about our activities? Please sign up for the English newsletter.