English Review - The Parliament of Things

On 23 November, the day before receiving the Spinozalens 2020, the internationally renowned philosopher, sociologist and anthropologist Bruno Latour, known for his studies on science, technology and political ecology, discussed his notion of the “Parliament of Things” in a livestream watched by more than six hundred people. The event, organized by Radboud Reflects, the  Internationale Spinozaprijs Foundation and the Embassy of the North Sea, included an interview with Latour led by philosopher Arjen Kleinherenbrink.

The Extended Constitution of the Parliament of Things

In the first part of the lecture, Latour clarified the notion of the “Parliament of Things” as he originally conceived it in the nineties. Rather than to “give a voice” to non-human entities, the idea was to let the scientists speak their voice as representatives of these entities. However, this could not be “a voice from nowhere”; the idea of the absolute certainty of science had to be contested. For the scientists to be representatives, they had to be subject to public trust, as much as to questioning, just like any other political representative.

Latour described how he conceived this extended parliament in order to deal with the disputes of the time between science and its critics. In this “voice from nowhere” of the scientists, he saw the danger of making room for conspiracy theories. The Parliament of Things as a place for dispute and conflict, would instead render the high complexity of scientific practice as more transparent. Latour then clarified how “things” are not simply objects, but rather “matters of concern,” assembling disagreeing parties in one location, thereby building “collectives.”

The Tragedy and the Loss of a Shared World

However, once we entered the era of “fake news”, it became clear for Latour that the Parliament of Things had not succeeded in stopping conspiracy. It also became clear that in our political reality, the conditions for such an extended constitution no longer exist. The Parliament of Things presupposed that humans shared a common world within which they could agree or disagree regarding the same issues, but humans today do not even agree about the issues at stake. We are divided between those willing to deny and neglect the “New Climatic Regime”, and those willing to acknowledge and confront it, whom Latour calls “terrestrials”.

Another presupposition of the ‘Parliament of Things’ as an extended constitution, was the idea of the human as a privileged being who is in the position to “grant” rights to non-human entities, but our current situation looks quite different: “We are in a tragedy. We moved from Rousseau and The Social Contract to the time of the terror of Robespierre.” Comparing this situation to the slaves who “took” their rights, Latour explained how today it is evident that this condescending, privileged self-conception was always illusory; the non-human is not waiting for us to “grant” it rights, but rather fights back more aggressively than ever and will take these rights by itself.

Bowing to the Power of the North Sea

In the third part of the lecture, Latour introduced some speculative suggestions. In this situation of war and tragedy, the tables have turned: the non-humans are forcing us to “bow” to a new kind of power. He gave the example of the Embassy of the North Sea, whose slogan it is that “the North Sea owns itself,” which would mean that the fishermen, the tourists and the dam builders in the North Sea are owned by it. “Can we submit ourselves, ask for rights, request permission from those who own the land?”, Latour asked in reference to non-human things. To confront the tragedy, we will need to speculate with fictions and inventions such as the Embassy of the North Sea, and these fictions will have to begin from a redefinition of the human in terms of its dependency on everything that allows it to exist.

Latour surprisingly concluded by suggesting that we abandon the term “non-human,” which has had a great presence in his work, for the reason that humans have never really been in the position of owners. We should stick to “terrestrials,” which without specifying a species, refers to “those who allow others to live, who make life habitable.” 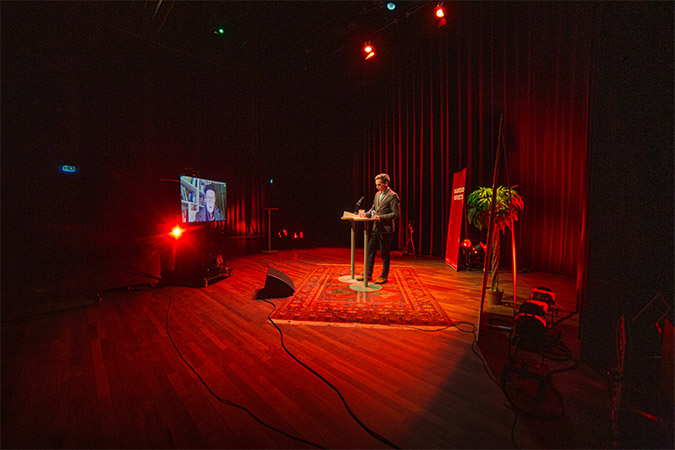 Kleinherenbrink opened his interview by asking Latour about the pessimism implicit in his description of the current events as a “tragedy.” “It is too late to act,” Latour straightforwardly confirmed. “The die has been cast”, and we are now paying for the deliberate non-action of the last decades. However, he denied being a pessimist; some amendments can be done, and we will manage to do them, but we will never return to the turning point in which we really could have acted.

Furthermore, those who are living in “Planet Exit,” like people who deny climate change or Covid-19, are inconvincible, Latour stated. Those who need to be convinced are the people living in “Planet Identity,” the same who seek for security and feel left behind, especially during the current pandemic. To convince them, it is important to raise issues concerning the land, the people and the country, but in terms of dependency rather than identity. These questions have been left for too long to reactionary groups because of a historical inability of the left to deal with them.

Finally, on the question how to deal with the problem of “fake news”, Latour answered that those who deny the authority of science do not do so because of a “cognitive defect”. They are simply not open to evidence, and they do not live in a planet where the New Climatic Regime is taking place. Their slogan can be summarized as: “Your world is not my world. Get lost!”

This report is written by Anna Rafecas Sogas as part of the Research Master Philosophy at Radboud University.