Announcement - Are our individual successes and failures in life the result of our own efforts? And if so, would a society based on the principle of merit be a just one? Political philosopher Michael Sandel holds that this is not the case. Meritocracy creates an arrogant elite, while leaving a vast majority of people angry and humiliated. Come and listen to the renowned American philosopher Michael Sandel on the tyranny of merit, the ethics of humility and the future of democracy. See full announcement below.

We live in a society where our status is largely determined by our merits. But to what extent are our successes and failures the result of our own efforts? Is a society based on the principle of merit a just one? Michael Sandel, professor of political philosophy at Harvard University, argues in his newest book The Tyranny of Merit that this is not the case. Meritocracy has created an arrogant elite and leaves the majority of the people estranged. In this livestream, organised by Radboud Reflects in collaboration with the Faculty of Philosophy, Theology and Religious Studies at Radboud University, Michael Sandel engaged in conversation with students and staff members of Radboud University, to explain his position. The conversation was moderated by Christoph Lüthy, professor of philosophy and faculty dean. To kick off the event, rector magnificus Han van Krieken spoke some words of welcome. 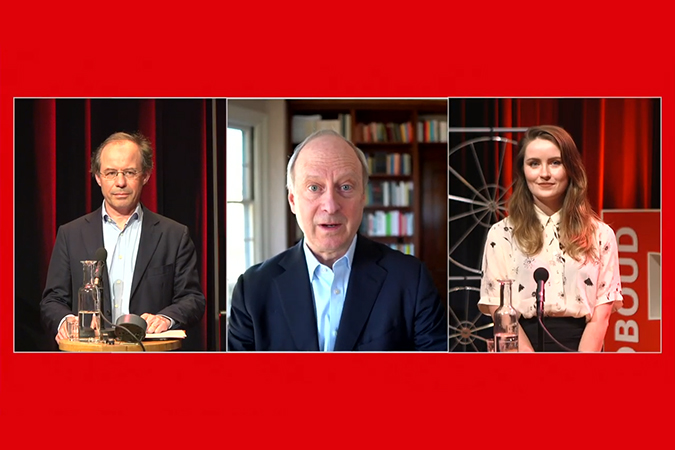 The urgency of The Tyranny of Merit

As Sandel preferred discussion over lecturing, the evening was structured as a series of small conversations. First up was Christoph Lüthy, who asked about the urgency of the book and why it was written now. Sandel said that several events that took place in 2016 motivated him to write The Tyranny of Merit: “I have thought about the relation between meritocracy and justice for a long time. I wrote this book in response to the events of the Brexit and the election of Donald Trump. We saw a rise of authoritarian populist movements around the world. How to make sense of it?”

Sandel’s analysis is recognisable from a European viewpoint, as we have seen a rise in populism and anti-meritocratic rhetoric. Yet at the same time, parts of the book seem particular to American society. Lüthy inquired to what extent the anger against meritocracy is related to the skewedness of the school system in the United States. As primary schools and high schools in the US are funded with property tax, rich neighbourhoods have far higher school budgets than poor neighbourhoods. Sandel: “I am in favour of better funding. The US system is non-progressive and a source of injustice. But I am not sure if I agree with the suggestion that social-democratic welfare states are exempt from these issues. There too, the sentiment against the elite is growing. The backlash against mainstream parties has something to do with xenophobia and nationalism, but also with the sense that people with high credentials look down on others.”

According to Sandel, we have created societies of winners and losers. Not only in the US and the United Kingdom, but in many European democracies as well. Those who landed at the top have come to believe that this is purely due to their own success. In this, they ignore the role that luck has played. This is at the heart of the Tyranny of Merit. 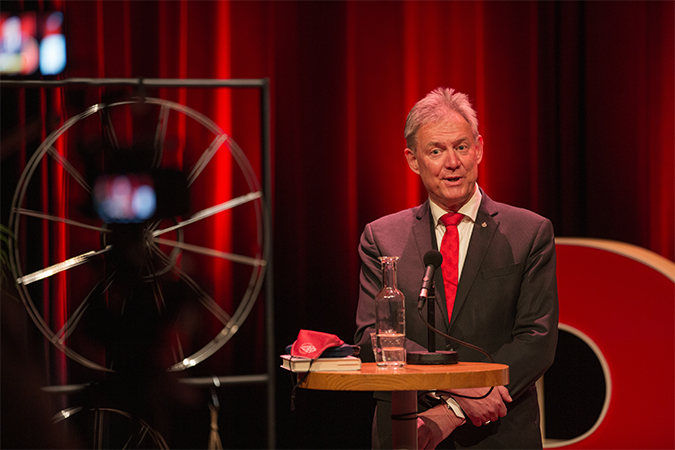 The next question was asked by Cherelle de Leeuw, Master’s student in political science and city councillor in Nijmegen. She asked Sandel whether there is a moral basis for the redistribution of goods? Sandel’s main criticism is that meritocracy leaves the winners believe that the winnings are due to their own doings, and therefore “they owe little to the ones who struggle; after all, they have no one to blame but themselves. This is corrosive of the common good and of mutual respect. What we need, then, is to open up to the idea of shared responsibility.”

Representation in democracy and academia

Marleen Huizingh, Master’s student in philosophy, noticed that in the acknowledgments of his book, Sandel mainly consulted people with excellent credentials. She wanted to know how we would be able to create better representation of social classes, within democracy as well as academia. Sandel agreed with her that representation is an important issue. Representative government and higher education have insufficient focus on broadening representation. 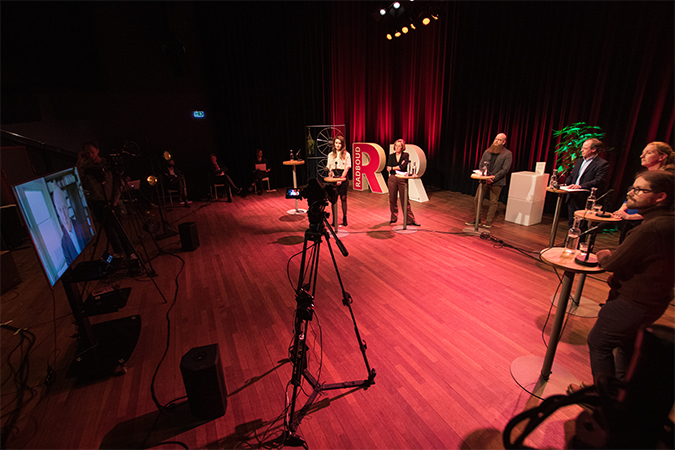 Recognition and the labour market

Agnes Akkerman, sociologist and full professor of industrial relations, continued the conversation. Akkerman has done empirical research on merit and has indeed found, in line with Sandel, that people without a college degree feel looked down upon. But she also found a relation with employment contracts: people in unsecured labour, both those with and without a college degree, feel looked down upon. Akkerman asked: “Can your analysis explain these findings? And could reorganisation of the labour market not be an easier, perhaps sufficient solution to the problem?”

Sandel found Akkerman’s analysis fascinating, since flexible and insecure labour is going to be more and more prominent in the gig economy. Sandel thought her findings were in line with his writings. He explained: “It is easy to see a connection between insecure labour contracts and people feeling looked down upon. In both cases the value of work is not properly recognised. Regulating employment contracts would be an important step in fixing these issues, but not a sufficient step. We should still address the relation between elite and working class. For that we should reward work properly, both financially and regarding dignity. This requires changing regulations, but also rethinking attitudes.”

The floor was then given to Florian van der Zee, research Master’s student in political philosophy. Van der Zee: “The idea of meritocracy can be summarised as ‘You get what you deserve’. This has two sides: the exultation of merit and a moral agreement between winnings and desert. Against this idea you introduce the notion contributive justice and the redistribution of both recognition and wealth. But if we take the project of contributive justice seriously, doesn’t that reintroduce the notion of getting what you deserve?”

Sandel agreed that contributive justice, which addresses the question of dignity of work, seems to reinstate an alignment between the contributions we make and the honour we receive. Is that not a reintroduction of appreciation of merit? That depends on how we characterise the ideal of human agency, according to the political philosopher: “The allure of meritocracy is that we can make it if we try: we are self-made and self-sufficient. This is the idea of human agency. I am challenging not the promise of human agency as such, but rather construing human agency and freedom in individualistic terms. The individual picture misses not only the role of luck, but also how we are indebted for our successes. We should reconstruct agency as a collective effort, something we do together in a community.” 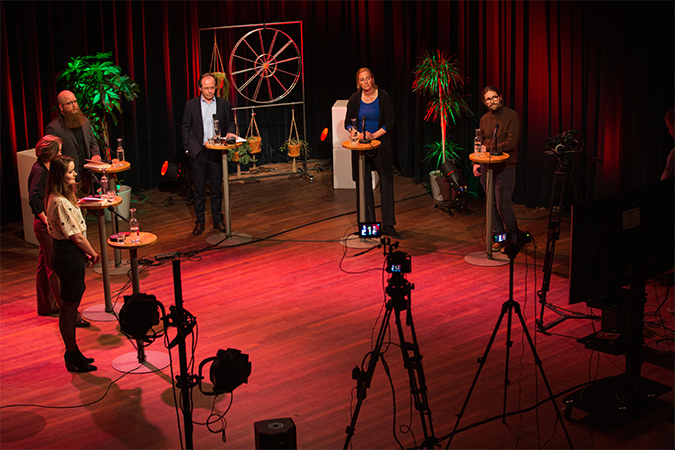 Sortition as a solution?

The evening’s final questions were posed by Mathijs van de Sande, assistant professor of political philosophy, who wondered if the case that Sandel makes for lottery in higher education, could also be applied on democracy. Would sortition be a solution to overcome the tyranny of merit? Sandel thought this path was worth exploring: “Some versions of sortition could be a response to the tyranny of merit. But sortition in government is not a full alternative for the current system. Sortition may reduce the role of money in elections, and also the overemphasised role of the credentials of representatives. But I do not want to entirely give up on representation in government.”

Are our individual successes and failures in life the result of our own efforts? And if so, would a society based on the principle of merit be a just one? Political philosopher Michael Sandel holds that this is not the case. Meritocracy creates an arrogant elite, while leaving a vast majority of people angry and humiliated. Come and listen to the renowned American philosopher Michael Sandel on the tyranny of merit, the ethics of humility and the future of democracy.

Sandel argues that meritocracy – the ideal that people are rightly moved into positions of success and power on the basis of their talent, abilities and efforts – is at the heart of our polarized public life. Many highly educated ‘winners’ in today’s society suffer from meritocratic hubris. They care little about the common good and look down upon those who have not made it. This inflames the divide with the lower educated and other groups that are left behind in our global economy, and fuels extreme political polarization. To overcome this political strife, Sandel argues we should reconsider our attitudes towards success and failure and the way we organize our global society.

Those who have flourished should look in the mirror: for is their success truly their own doing? Or is it also a matter of luck? A talented soccer player might be successful in today’s society if he trains hard. Would he have been born during the Renaissance, his dribbling skills would have been useless as society would have preferred a fresco painter. Therefore, winners should be more grateful and humble, and ought to recognize how other people like their parents, teachers, and society as a whole, contributed to their successes. Sandel holds that in doing so we will be able to move towards a society that is more affirming of the dignity of work. This will pave the road towards a politics of the common good.

During this evening we will talk with Michael Sandel about the problems of meritocracy, the cultivation of civic virtues and the importance of reviving our understanding of the common good. How does meritocracy contribute to inequality? What role does education play in this? Is it possible for people to choose the common good over their individual successes? And what kind of changes are necessary to move towards a more humble and just society?

Political philosopher Mathijs van de Sande and sociologist Agnes Akkerman will moderate the conversation. They are joined by Radboud Universitymaster’s students in philosophy Marleen Huizingh and Florian van der Zee and master’s student in political science Cherelle de Leeuw. During this interactive program there is plenty of room for digital questions from the audience.

Michael Sandel is professor of political philosophy at Harvard University. He has been heralded as “the most relevant living philosopher” and a “rock‐star moralist” and wrote numerous books on the most vexing moral and civic questions of our time. Sandel’s legendary Harvard course ‘Justice’ has been viewed by tens of millions of people. His books What Money Can’t Buy: The Moral Limits of Markets and Justice: What’s the Right Thing to Do? were international bestsellers and have been translate into twenty-seven languages.

In 2020 he wrote his latest work: The Tyranny of Merit: What’s Become of the Common Good?. In this book he analyses how the liberal pursuit of meritocracy has betrayed the working classes and fostered a populist backlash. He offers an alternative way of thinking about success and argues for a politics that puts dignity and humility at its center.