(Did you join this Current Affairs Lecture? Please fill out the evaluation form. It is much appreciated.) |There will be no video available | Podcast

Announcement - Last night (Wednesday 23 February 2022) Russia invaded Ukraine. How could this happen? And how will this situation evolve? Come and listen to political scientist Bertjan Verbeek, historian Paul van Reef and philosopher Evert van der Zweerde who will reflect on the recent developments. See full annnouncement below.

Review - The Russian Invasion in Ukraine

What was feared for months became reality on 23 February 2022. Russia invaded Ukraine. Radboud Reflects and VOX organized in a few hours a Current Affairs Lecture about this urgent matter. Political scientist Bertjan Verbeek, historian Paul van Reef, philosopher Evert van der Zweerde and moderator historian Lema Salah - all from Radboud University - responded very quickly when they were asked to share their expertise in this Current Affairs Lecture during lunch time in CC1 of the Radboud University Collegezalencomplex. 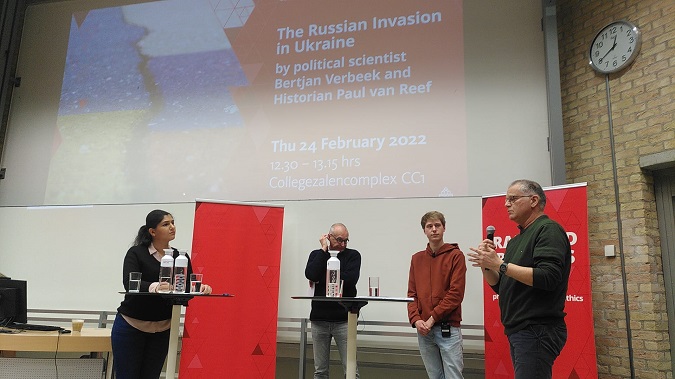 Historian Paul Reef was surprised by what happened last night (23 February 2022): Putin sits down and gives a half hour lecture on why Ukraine is not a nation. It is difficult to place this, especially since there were many discrepancies in his narrative of Russian and Ukrainian history. In his narrative Ukraine is an originally Russian country that has to be re-taken, yet Paul Reef doesn’t think Russians will recognize this narrative. Also, this is not as sudden as it seems: there has been an ongoing war for eight years now, which started when Crimea was occupied, and in which 15.000 people have died. It is not often mentioned in Dutch media that the current situation is an escalation of a frozen conflict.

Philosopher Evert van der Zweerde adds that the situation is very complex. One of the most important questions might be: to what extend can one use history as an argument in current affairs? Because if you wish to do justice to all the historical claims that are being made in Eastern Europe, which at times go back to the 1400’s, you would need at least 4 Eastern Europes. This inevitably means that sticking to only one of those claims means conflict. Besides, Putin might be twisting history, but what he says is not completely ridiculous. The borders of Ukraine are to a certain extend the artificial product of World War II. But then, almost all countries are artificial because they are the effect of political decisions, except maybe Iceland.

Ukraine itself is divided. The situation in the East is very different from that in the West. Most people in the East would say that they are Russians. They speak Russian fluently and feel that they have been “Ukrainised” in the past years. People in the East will basically say that they don’t really care who wins, they just want to be left in peace. But West Ukraine is a completely different story. People there have a strong Ukrainian national identity.

Evert van der Zweerde adds that the best option for Putin is to frame this conflict as a peace operation. Frozen conflict will be in Russia’s best interest. That way, Russia has broadened its borders whilst avoiding all-out war with Western powers. At the same time, there is the risk that this will turn Ukraine into a new Vietnam, where Russia fights the USA on – in the current case – Ukrainian territory.

Recognition for Russia as a great power

Political scientis Bertjan Verbeek says that another factor that comes into play is that Putin wants to prevent a revolution at all costs. He is dealing with a nation that is in a sense still deeply affected by the catastrophic dissolution of the USSR. Putin is now working toward recognition for Russia as a great power, and for himself as a great leader.

Bertjan Verbeek reminds us that, strikingly, we have seen wars like this before; in 2018 in Georgia for example, which at the time was also aiming to join NATO. Russia could not tolerate this, and the conflict further escalated, resulting in a war that lasted 5 days. Then, Russia did not go as far as with Ukraine, but they did cut a major oil line that was crucial to Georgia. Thereby, it made clear it does not accept former USSR territory to join NATO.

Furthermore, he adds, if western leaders really see Putin as the newest evil, totalitarian villain who threatens western democracies, then why do they already principally exclude the possibility of military intervention? This is puzzling, to say the least. You would think that the west would at least keep the possibility of military intervention open, even if it’s just to deter Russia.

Evert van der Zweerde agrees, but adds that the west has not done much to de-escalate the current situation. At no point has any western power stated toward Russia like “we understand that you see a problem, let’s discuss how we can deal with this”. The west has allowed absolutely no room for Russia’s perspective, and recognizing the existence of this perspective may have helped to decrease tensions

Responsibility of the west

Apart from the consequences for the west, what are responsibilities of the west? Paul van Reef pays that the West, and the Netherlands in particular has a big responsibility, as it has done nothing but indulge Putin and other Russian oligarchs. There is a lot of complexity here: we have been offering countries like Ukraine membership of NATO, yet we have meanwhile continued to trade with Russia and facilitate its power growth.

Evert van der Zweerde agrees, and adds that we should distinguish between responsibilities of governments and that of citizens, especially those who have ties to Russia.  We as normal people should do everything to maintain our relationships with people in the East.

Playing with the western set rules

Under Putin administration Russia has violated international law frequently. Take Crimea for example. If there would have been a NATO sanctioned referendum back in 2014, the majority of the Crimea’s population would probably have voted to become part of Russia. But by annexing Crimea the way he did, Putin is sending two messages: this is our territory now, and  I don’t care about following rules that were set out by western powers. The important message then is the same as it is now: we are playing with the western set rules. Of course, we can recognize that the United States have systematically been doing the exact same thing: they have also invaded foreign nations, claiming that they are there to protect citizens and bring freedom and democracy. But recognizing this doesn’t help us much. It does not make the actions of either Russia or the US any more legitimate or easier to deal with.

All this will implore Europe to build a much stronger European defense system. It could also possibly lead to the fall of NATO, as the centers of major international conflict are shifting away from the Atlantic region, toward Eastern Europe and Asia.

By Liesbeth Jansen and Pam Tönissen

Last night Russia invaded Ukraine. How could this happen? And how will this situation evolve? Come and listen to political scientist Bertjan Verbeek and historian Paul van Reef who will reflect on the recent developments.

Last night President Putin delivered an unexpected speech in which he questions Ukraine's right to exist. Almost immediately after that, bombing started in several cities in Ukraine. Many victims are feared.

Since the annexation of Crimea in 2014, tensions have escalated, not only between Ukraine and Russia but also between Russia and the West. In the past few months, Russia has been declaring in increasingly harsh terms that “threats from Ukraine” can no longer be tolerated.

Europe and the United States have already strongly condemned the attack and are announcing heavy economic sanctions, but will always want to avoid military intervention. China’s voice, meanwhile, is strikingly absent. How will this conflict affect international relations?

What will this war mean for the people of Ukraine? What can we expect? And how does the conflict in Ukraine affect tensions between the West and Russia? Bertjan Verbeek and historina Paul van Reef discus these questions, historian Lema Salah is the moderator.

Bertjan Verbeek is a political scientist at Radboud University. He conducts research on crisis decision-making in foreign policy. He also conducts research into the learning capacity of governments during and after crises.

Paul van Reef is historian at Radboud University. As a PhC candidate, he is specialized in modern political European history, history of sports and international organisations.

Evert van de Zweerde is political philosopher at Radboud University. His research focusses on ideology, civil society and democracy. Next to that he is founder of the Democratic Laboratory.

Lema Salah is historian and gender and diversity expert. She works as PhD candidate at the Political Science Department of Radboud University and the Netherlands Defence Academy. In her research she explored the gender policies of the United Nations in Afghanistan.

Come and learn in your lunch break more from political scientist Bertjan Verbeek about the background and consequences of the Russian Invasion in Ukraine.

There will be no livestream.