The Plight of the Unauthorized Stayer

In this study, I compare the role of Christian faith-based organizations (FBOs) in migration in the United States and the Netherlands. More specifically, I examine FBOs’ assistance efforts to people without authorized residence status in the two countries. Since the end of World War II, FBOs have been instrumental in assisting migrants at various junctures of their journeys. In the post-war era, their efforts were largely concentrated on assisting migrants with resettlement. In more recent decades, however, the efforts have shifted from resettlement assistance. Beginning in the early 1980s, Central Americans from certain countries were systemically denied asylum in the United States. In fact, many did not even apply for asylum because they knew such an effort would have been futile. Finding the federal government’s immigration policy unjust, churches organized a response. The response became known as the Sanctuary Movement. At its core, the Sanctuary Movement was a concerted effort to assist people who were not welcome by the American immigration authorities. In this dissertation, I refer to such people as unauthorized stayers: people who do not have, or no longer have, the authorities’ blessing to remain in the country. FBOs’ assistance efforts ranged from providing shelter, to finding employment, to connecting people with legal advice. The movement that was started by the faith community did not operate in a vacuum, and was soon joined by local governments, universities, and other institutions sympathetic to the cause. The movement has waxed and waned over the years, due to geopolitical developments, but has seen a resurgence in the latter half of the 2010s when Donald Trump was elected president and vowed to deport unauthorized stayers. Nowadays, the tensions are primarily between FBOs and subfederal governments on the one hand, and the federal government on the other hand.

Though the Netherlands did not experience an en masse church asylum movement, it certainly did see a powerful response on the part of FBOs when the central government introduced restrictive immigration measures around the turn of the century. In 1998 and 2001, two cornerstone pieces of legislation were passed aimed at keeping unauthorized stayers out. The former, known as the Linking Act, disallowed most types of government aid to unauthorized stayers. The latter (Aliens Act 2000) would end government accommodation for an asylum seeker four weeks after his or her application for asylum was denied. Before these changes were even implemented, churches had already planned a response to organize shelters for unauthorized stayers who would soon be rendered homeless. Recognizing the threat to public order, health, and safety that destitution would bring about, municipalities quickly became involved in funding shelters that were run in conjunction with, and primarily by, the churches that had had experience in assisting asylum seekers for years. Thus, here too, the tension became one between FBOs and municipalities on the one hand, and the central government on the other.

It has become clear that due in large part to trends toward restrictive immigration policies in both countries, FBOs have been stepping in to fill the gaps left by such measures. But why? This is explored in Part One, which comprises Chapters 2, 3, and 4. American FBOs’ motivations in assisting unauthorized stayers are dealt with in Chapter 2. Dutch FBOs’ motivations are dealt with in Chapter 3. Chapter 4 compares the American and Dutch motivations, and discusses their implications on church-state relations. Even in the initial phases of the research, it became clear that FBOs do not function in a vacuum. As mentioned, there is a close link between FBOs and local governments in both countries. Thus, these governments’ motivations are explored in Part Two.

In Part Three, I draw conclusions and offer a new framework. I explore the possibility of another approach that adopts a broader reading of the First Amendment free exercise clause, which allows the decision-maker to apply a broader set of factors in determining which side should prevail in a free exercise case. Adopting such a test could ameliorate the deficiencies inherent in a religion-only protection understanding of the First Amendment. 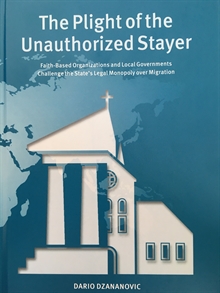