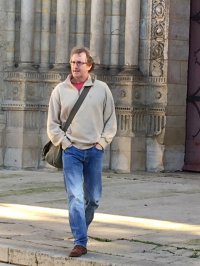 We cordially invite you to the last RMEMS lecture of this academic year, on June 20 (time and location to be announced). Professor Chris Schabel (University of Cyprus) will give a lecture, titled: Pierre Ceffons and the Zenith of the Collège des Bernardins: Scholasticism, Humanism, Architecture, and Reform among the Cistercians at the time of the Black Death. A short introduction to the subject can be found at the bottom of this email. The talk will be followed by drinks. You can register for this event by sending an email to this address (rmems@ru.nl). We hope to see many of you on this last official RMEMS activity of the academic year.

The Organizing Committee of RMEMS

Pierre Ceffons and the Zenith of the Collège des Bernardins: Scholasticism, Humanism, Architecture, and Reform among the Cistercians at the time of the Black Death.

In an article published in the Low Countries in 1957, Damasus Trapp OESA drew attention to the Opera Omnia of the Cistercian Pierre Ceffons, a theologian active at Paris around the time of the Black Death. Trapp began by remarking, “History has practically forgotten Peter Ceffons of Clairvaux – Petrus de Ceffons Clarevallensis – though by right he should occupy a little niche of glory in the galleries of history because his literary production is vast, manifold and important.” Despite Trapp’s encouragement, over the next half century the total number of pages written about Ceffons barely exceed Trapp’s 50-page article. Since 2012, however, the collective effort to edit Ceffons’ writings has begun to reveal his significance, and the discovery of the Cistercian’s personal correspondence provides us with a unique glimpse into the world of letters in the mid-fourteenth century. In particular, Ceffons is the product of the Cistercian Pope Benedict XII’s (1334-1342) efforts to make the Collège des Bernardins at the University of Paris rival the schools of the mendicant orders and the Sorbonne, with a huge new Gothic church to go with the monumental building of the monks. Symbolically, despite Ceffons’ own pleas, surviving in his letters, the church was never completed. Ghost writer of a letter from the Devil to the pope and cardinals, scribe of a lengthy response by Jesus Christ, witness to a long dream during the Black Death about excessive regulation in the Cistercian Order and the Church as a whole, author of a treatise on papal power, sarcastic orator, prolific scholastic, great admirer of Tullian eloquence, and witness to the Great Plague, Ceffons thus represented the apogee of medieval Cistercian university education.