Book on Theophanu, Princess of the East, Empress of the West

Since November 2020, a mural of the Byzantine princess and later empress Theophanu has been painted on the side wall of the Holland Casino on the Waalkade in Nijmegen. The book Theophanu, Princess of the East, Empress of the West was published in 2021. The text was written by Mariëtte Verhoeven and journalist Sinan Can wrote the foreword. 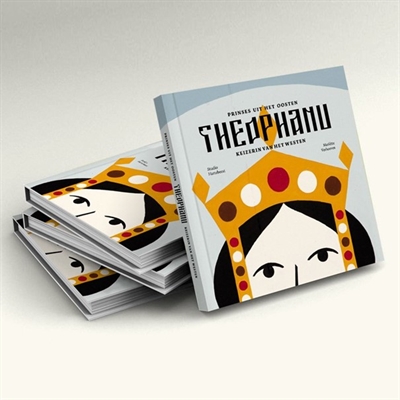 In the richly illustrated book Theophanu: Prinses uit het Oosten, Keizerin van het Westen, art historian Mariëtte Verhoeven tells the life story of Theophanu, a girl who was born around the year 960 and who lived for several years as a princess at the court in Constantinople, the capital of the Byzantine Empire. She was betrothed to Emperor Otto II at the age of 12 and crowned Empress of the Ottonian Empire, which stretched across much of what is now Western Europe, in Rome. Regent over her son Otto III, Theophanu became one of the most important women in medieval Europe. Because of her 'Greek' descent, Western contemporaries painted a negative image of her and her role was marginalised. The book now dedicated to her puts Theophanu in the spotlight and follows her on her journey from East to West, past buildings and works of art in Constantinople, Rome, Ravenna, Aachen and Nijmegen, where Theophanu stayed several times and eventually died.