On Thursday, November 21 at 3.30 – 5.30 pm, Radboud Medieval and Early Modern Studies (RMEMS) organizes a ‘work in progress’ – afternoon, which will also serve as our unofficial opening of the academic year. The event will take place in EOS 01.150. Alfons Brüning and Sándor Chardonnens will tell us about their current work in progress (for more information, see the texts below). Though the lectures will be held in Dutch, following the event there will be drinks for all participants, taking place in The Yard. 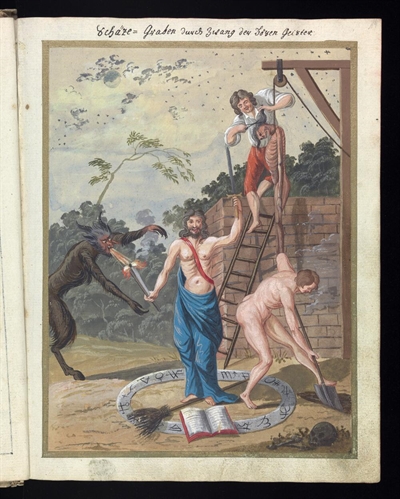 Londen, Wellcome Library, MS.1766, fol. 14r
(<http://wellcomelibrary.org/player/b1968583>, CC BY 4.0)
-
The proverbial Faustian magician of the early modern religious and literary imagination is often depicted standing alone in his circle to negotiate a pact with our saviour. Yet despite the persuasiveness of the image of the ritual magician as a lone wolf, their conjuring manuals reveal a more complex set of practices. To be sure, practitioners of theurgic magic, with its emphasis on contemplation and visions, would indeed seek seclusion for most of the ritual work. Necromantic magic, on the other hand, has more diverse aims besides gaining knowledge or glimpsing the divinity, and situates the operator in a social circle of like-minded practitioners. The idea, then, that magicians went from a medieval, clerical underworld to early modern lone wolves is not only erroneous but oversimplifies the complexity of magical practices in early modern Europe. In this paper I propose an alternative point of entry: a close examination of the primary sources, that is, the conjuring manuals of ritual magicians, with specific attention to magic circles. It will emerge that the sources give a more varied insight into the social practices of magical operators that bridges the gap between the medieval clerical underworld and the early modern Faustian lone wolf.
-
Prof. dr. Alfons Brüning:
Confessionalization and Confessional Culture in the European East? Parishes and Priests in Eastern Orthodox Christianity in the Early Modern Period
- 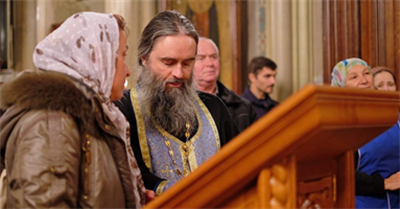 Orthodox priest hearing a parishioner’s confession, a practice strongly emphasized and enhanced in early modern reforms of the parish clergy

-
For historians of Early Modern times the paradigm of confessionalization has long developed into a well-established and frequently applied research perspective. The time between the early 16th and – roughly – the early 18th century, therefore, has commonly acquired the signature of the “confessional age”. More recent years have seen the subsequent establishment of a follow model, partly in development of the confessionalization paradigm, which focuses on patterns of confessional culture (Konfessionskultur). Concomitant debates, however, are carried out in, and with relation to, Western Europe and Germany in particular, and to Latin Christianity. The picture in the European East appears to have been quite different, in the sense, for instance, that the narrow link between church and state as a prerequisite for confessionalization hardly would apply in the large and multi-confessional empires like those of the Habsburgs, the Ottoman Turks, Poland-Lithuania or Muscovite Russia. However, there have been cautious, and in fact fruitful attempts to apply the mentioned paradigm also to the Eastern European regions. The lecture, describing a current research project, wants to continue such efforts by making use of the model of confessional culture, and outline the results such an endeavor could possibly generate. Within the framework of confessional culture, priests, with their changing profile, education and position in society always have formed a cornerstone (one only needs to think of the classical protestant pastor’s house [Pfarrhaus], or the counter-reformation ideal of the celibate, Catholic priest). Additionally, parish life on large scale mirrored the changes brought about during the “confessional age”, like social discipline, hierarchical order, piety etc. All this, as shall be demonstrated, induced through competition with Latin Christianity, but with peculiar accents and patterns, with some delay also took place within the Orthodox churches of the East, in Romania, Ukraine, and ultimately Muscovite Russia before and after Peter the Great.