Last month during Nijmegen Language Capital, Prince Carlos de Bourbon de Parme handed over his family archive to the Catholic Documentation Center and Radboud University. The archive, which extends over fifty meters, contains letters, photographs and documents that offer new perspectives on Spanish and European history. Brigitte Adriaensen, professor of Spanish Language and Culture, was closely involved in the transfer.

Prince Carlos de Bourbon de Parme, full nephew of King Willem-Alexander, is the eldest son of Princess Irene and the late Carel Hugo van Bourbon-Parma. The prince had been thinking for some time about what he could do with his extensive, multilingual family archive. This archive includes valuable materials of a personal and political nature, such as travel photographs from the early twentieth century, letters from the Pope and correspondence between European noble families, as well as never explored before sources on the turbulent political history of twentieth-century Spain.

Prince Carlos turned to the Catholic Documentation Centre and the Radboud Institute for Culture and History (RICH). ‘My colleague Dries Raeymaekers and I went to the Fort in Houten, where the archive was stored at the time, to see what was actually in all those boxes,' says Brigitte Adriaensen, Professor of Spanish Language and Culture. 'That was very exciting for me, of course, because it contains a lot of Spanish history. We were immediately intrigued.' 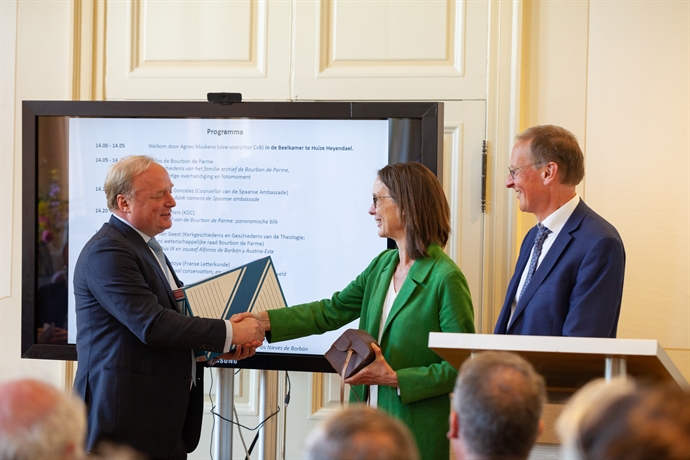 The family archive offers a unique glimpse into the history of the Carlist movement that emerged in Spain in the nineteenth century. The then Spanish king Ferdinand VII had only daughters and was to be succeeded by his brother, Carlos Maria Isidro. Ferdinand managed to keep Carlos off the throne, however, by repealing a law that excluded women from ascending the throne. Ferdinand's three-year-old daughter Isabella assumed the throne in 1833, much to the dismay of Carlos, who therefore proclaimed himself King of Spain. His conservative supporters were called Carlists. During three wars (between 1833 and 1876), they - unsuccessfully -  battled the more liberal followers of Isabella to get Carlos on the throne officially.

Carlism has continued to have great influence in Spain and the rest of Europe even after the nineteenth century. The line of Carlos Maria Isidro runs through the House of Bourbon de Parme, which still holds a prominent place in the European nobility. Adriaensen: ‘Throughout the world, people are looking at the history of conservatism, and Carlism plays an important role in that.’

The House of Bourbon de Parme is an international royal family with branches in Austria and Italy. The archive therefore contains a large number of documents that transcend borders, such as letters from the last Empress of Austria and other distinguished figures from the European nobility. ‘This is another reason why Prince Carlos brought the archive here, rather than to an archive in Spain. Here we also study the broader European context. The transfer provides opportunities to look at the archive and Carlism, also in relation to conservatism, in a nuanced way and not only through a Spanish lens.’

The archive is a rich breeding ground for research from various perspectives in the humanities. One of the showpieces of the archive is the material of Maria de las Nieves de Braganza, a great-aunt of Prince Carlos. After the Carlist Wars, she was no longer welcome in Spain for a period of time. Together with her husband and a number of servants she travelled around the world in the early twentieth century. The diaries that she wrote during her travels have already been partly digitised by the Spanish Archivo Histórico Nacional. When the family archive was transferred, however, an extensive collection of photographs also surfaced.

‘What really fascinated me was that she also took twenty thousand photographs, which until now have never been examined,’ says Adriaensen enthusiastically. ‘Some look like holiday snapshots or failed images, but some are also very beautifully made. It is hard to determine whether she really had artistic ambitions - she probably did, since she took so many photos. But she also has clear ethnographic ambitions, because she takes photographs that try to express a certain kind of vision of society. Anne van Schie, Arts and Culture Studies student and intern at the archive, has demonstrated this convincingly during her talk at the transfer ceremony.'

The photographs expose social relations of the early twentieth century. 'Maria's materials highlight the role that gender and class played at the time of emerging tourism. They literally show who had to carry the luggage, and who did what,' Adriaensen states. For example, Maria photographed her travel companion Carmen, a woman of colour. She worked under poor conditions as a housekeeper for a family in Florida, until she was bought out by Maria and taken on her travels. ‘From a postcolonial perspective, these are very interesting photographs.’

Maria de las Nieves de Braganza's photographs are just one element of the large, diverse archive. 'Many of these documents are very interesting and have enormous historical value. In order to be able to study them properly, we will also try to attract new researchers, from Spain for example,’ says Adriaensen.

Before research can truly begin, the documents must first be archived. This process also presents an interesting challenge for RICH. Adriaensen: ‘We are going to see if we can start a new Digital Humanities project in which the digitisation of the archive is central. It is incredibly important to properly map this complex, multilingual and multimedial archive and make it accessible for further research.’