A grave in the clouds: exhibition about the poem Todesfuge

From 11 December 2020, the Jewish Historical Museum in Amsterdam will be the host of 'A grave in the clouds', an exhibition about Paul Celan's poem Todesfuge. The poem is seen as THE poetic ‘translation’ of the horrors of the Holocaust. Professor Paul Sars is guest curator of the exhibition.

Todesfuge is about the atrocities of the concentration camps in World War II. It is the most famous work of the German-speaking Jewish-Romanian poet Paul Celan (pseudonym for Paul Antschel), who is considered one of the most important poets of the 20th century. Celan's parents were murdered in concentration camps by the Nazis, he himself survived several labour camps. This year it is exactly 100 years after Celan's birth, 50 years after his death and 75 years after the liberation of Auschwitz and the origin of the poem. 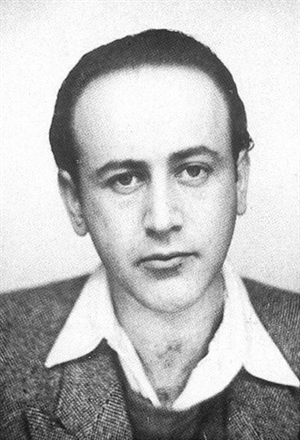 The exhibition highlights, among other things, the social impact of the poem and its great influence on the work of visual artists, composers and writers. It was not well received when it was published in 1952: some critics consciously or unconsciously ignored the theme, others felt that the horrors of the Holocaust could not be expressed in aesthetic form. The poem is now seen as the ultimate poetic expression of the Holocaust. It has been translated into more than 40 languages.

‘A grave in the clouds’ has come into being as a collaboration between guest curators prof. dr. Paul Sars from Radboud University Nijmegen and artist Helly Oestreicher. One of the poem's three original typescripts has been in the possession of Paul Sars since 2004, who obtained his PhD on Celan's poetry. The typescript is at the heart of the exhibition that focuses on Celan's life, the meaning and reception of Todesfuge, and the poem's impact on other artists.

Together with Bureau Ketel, Paul Sars has recently developed a 24-page educational workbook on Todesfuge, the persecution of the Jews and the great value of remembrance and commemoration, which was offered to 25,000 high school students and their teachers for free. The project was realised with support from the National Fund for Peace, Freedom and Veteran Care (vfonds), the VsB fund, and the Faculty of Arts of Radboud University. In order to be able to organise more activities around the poem and the workbook, a crowdfunding campaign has also been started, which is still open for donations.

The exhibition can be seen at the Jewish Historical Museum in Amsterdam from December 11, 2020 to May 16, 2021. The exhibition will be opened online on December 10 at 6 pm, and can be followed live via JCK.nl/opening and the JCK facebook page. Registration is not necessary. On Sunday December 13 an online lecture will be given. More information can be found on the museum's website.