They were the largest slave traders in Amsterdam: Jochem Matthijs Smitt and his son Coenraad Smitt. Yet their trading company was not known in history until historians Jessica den Oudsten (Radboud University) and Ramona Negrón (Leiden University) found a pile of notarial deeds about the difficult voyage of slave ship 't Gezegende Suikerriet in 2022. In their book De grootste slavenhandelaren van Amsterdam they describe the arduous circumstances on board. 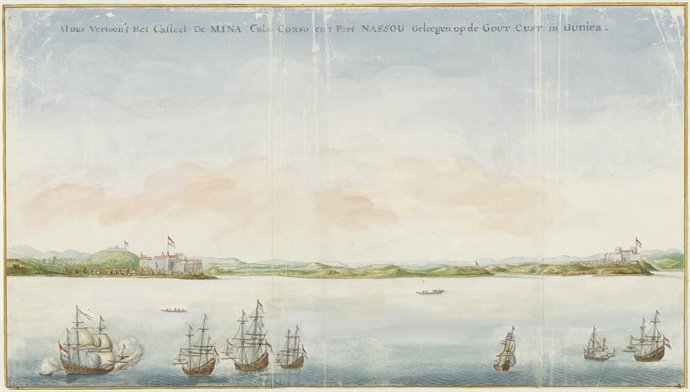 In the summer of 2020, RICH PhD candidate Jessica den Oudsten and Ramona Negrón, PhD candidate at Leiden University, worked on the Alle Amsterdamse Akten project. Together with volunteers and experts, they helped to digitise the millions of documents in the 3.5-kilometre-long Amsterdam City Archives. While checking transcriptions, the two historians made an exceptional discovery. ‘We were both independently reading a notarial deed about a slave ship called 't Gezegende Suikerriet ( “the Blessed Sugar Cane”). We immediately thought: this is a special story, because little is known about slave ships and what exactly happened on board', says Den Oudsten. They digged deeper and found out much more about the owners of the ship, Jochem Matthijs Smitt and his son Coenraad Smitt. ‘It turned out that they were the largest slave traders in Amsterdam,' says Den Oudsten. Based on these findings, Den Oudsten and Negrón wrote the book De grootste slavenhandelaren in Amsterdam ('The largest slave traders in Amsterdam"), in which they reconstruct a voyage of 't Gezegende Suikerriet, one of the ships from the Smitt family's fleet.

Historians are researching the history of slavery in more and more ways. The fact that this exceptional find has come to light after 300 years is a direct result of the digitisation of old archives, which makes them searchable. It is likely that in the course of time more elements about the Dutch history of slavery will come to light in this way. At the moment, however, little is known about the lives of enslaved people. That is precisely why it is important that this book is published now. ‘We have noticed that many people are genuinely interested in the past and in research into slavery. The book contains material that is interesting for researchers, but it is also intended for a wider audience,' says Den Oudsten.

In the book, the historians describe how Jochem Matthijs Smitt emigrated from Hamburg to Amsterdam around the year 1720 and started building up his business there. Initially he focussed on merchant ships that sailed directly between Amsterdam and Suriname. At that time, the West India Company still had a monopoly on the slave trade, but they gave it up in 1730. ‘By then, Smitt had already built up an extensive network with plantation owners in Suriname and had ships and crew members. We therefore think it was a logical step for him to enter the slave trade at that time, together with his son Coenraad Smitt, who later joined the firm’, says Den Oudsten. The number of voyages the men have to their name is remarkable. Den Oudsten: ‘They are the only slave traders who have continued for so long and have organised so many trips. There were other traders in Amsterdam who tried their hand at it after 1730, but they often stopped after one or two trips. This is probably due to the high financial risk that slave traders ran.’

The great risks are also reflected in the book: precisely because so much went wrong during the nine-month voyage of 't Gezegende Suikerriet, the historians were able to reconstruct this journey. It took three captains to complete the entire journey from the Dutch Republic via Africa to Suriname and back again. The first captain falls overboard while trying to reach the African coast in a small boat. The second captain is fired because of conflicts on board: he gives orders for abuse of enslaved people, which leads to the death of a number of people on the ship. Father and son Smitt are not on board but manage their affairs from their office in Amsterdam. For them, the loss of life means a loss of money. The dismissed captain also wants money, as compensation for his wages. The conflict between the captain and the traders results in a kind of lawsuit, for which notarial deeds were drawn up with statements by crew members about what happened on board; these same deeds were used by Den Oudsten and Negrón for their research. ‘So this was not a criminal trial about the terrible things the captain had done, but it was purely about money', Den Oudsten emphasises.

In their testimonies, the crew members talk about the maltreatment and abuse they had to inflict, but the enslaved people themselves do not have a say. ‘The sources are all written by the coloniser, so the experiences of the enslaved people themselves are not described', Den Oudsten explains. Yet, between the lines, the researchers have tried to map out the lives of the enslaved, both on board and after the voyage. In the meantime, the Amsterdam City Archives are continuing to digitise their documents, so that in the future we will hopefully learn even more about the lives of these people.

The book De grootste slavenhandelaren van Amsterdam was published on 23 August by Walburg Press and can be ordered here.

Integration and Social Mobility: The Descendants of Early Modern Immigrants in Amsterdam, 1660-1811 → This project by Jessica den Oudsten addresses one of the major questions in Dutch migration history: what happened to the descendants of the hundreds of thousands of Germans, Flemings and Scandinavians who migrated to the Dutch Republic in the early modern period?